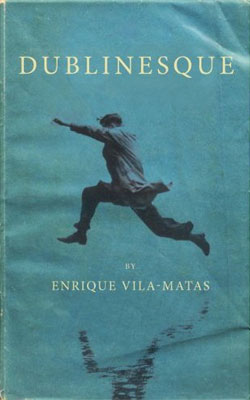 Enrique Vila-Matas is a consistently rich and challenging contemporary Spanish-language novelist. Revered in France, a mentor to Bolaño and his Iberoamerican brood, his prose is a model of world literature.

Dublinesque’s first page tells us that Samuel Riba, the troubled protagonist, “has published many of the great writers of his time” and is watching his trade merely survive. The last page informs us that he “is still enthusiastic about the appearance of the author,” at that point still a specter. These are characteristic beginnings and ends for Vila-Matas, and the narrative wealth is within them.

Riba doubts the snickering certainty of his perspicacity and has lost confidence in the need for literature or finding a brilliant heroic author. Taking a cue from the Philip Larkin poem that gives this novel its title, at sixty he takes three writers (who morph into Joycean characters) to Dublin, to an Irish wake for the end of a Gutenberg era obliterated by Google’s avatars and publisher spreadsheets. The three-month journey abounds with intellectual and aesthetic invocations, hip references to outliers: Duras, Walser, Lem and Dick, Sebald, Perec, Monterroso, Coldplay, and Billie Holiday songs, movies, apocryphal authors like Vilem Vok, and of course Joyce and Beckett. It is not uncharitable to argue that even when Paul Auster appears as a character in the novel, it is Vila-Matas’s metafiction that claims our attention. Much the same could be said when in his review of this novel, Terry Eagleton makes a silly case for Joyce’s “Irishness.” It is also no hyperbole that, in an era when Joyce and Beckett are being reclaimed for Ireland, Dublinesque takes their marrow, makes it strange, and becomes a brilliant novel already praised repeatedly as a masterpiece.

Vila-Matas is well aware that such configurations are de rigueur for bookish novels. So instead of eavesdropping on his own past, he makes Riba’s contempt unsustainable by textualizing the faith and hope one can have in literature. His novel additionally posits that in our voluble era, apocalyptic crises (the publishing one among them) can only be treated as parody. Dublinesque’s 2010 original has engendered about 170 reviews, articles, notes, and interviews. McLean and Harvey, who seem to channel all of Vila-Matas’s writerly past, will unquestionably add to the enthusiasm with their splendid and expert translation.

In recent interviews, Vila-Matas asserts that “by having invented reality and fiction at the same time, we set up the same traps of previous generations,” feeling that “reality is becoming an interesting adventure for me. Although some might believe that “everything is solved with some literary quotes,” Vila-Matas doesn’t bite the metafictive hand that brought him to fame; he is simply inveighing against writers who lose form, a condition never found in his magisterial output. His is an internal realism, and if some have perceived Dublinesque as autobiographical payback to a publisher he famously left, Vila-Matas admits such elements are present, “although transformed to the point they are unrecognizable.”

Dublinesque, Vila-Matas’s best and most engaging novel to date, is full of warmth and compassionate speculation about what it means to go on with one’s life.