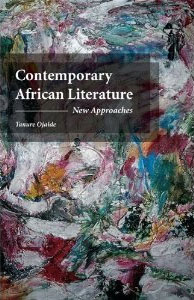 In ten essays anchored in the search and study of topics and approaches shaping contemporary African literature, Nigerian scholar-poet Tanure Ojaide investigates and examines aesthetics, politics, conflicts, and evolving shifts in the works of contemporary African writers. This book reinforces the importance of Ojaide’s contributions in the area of criticism in modern African literature. In Ojaide, African literature has gained a prolific critic. As described by Kwame Dawes in a book review of Ojaide’s Poetic Imagination in Black Africa, Dawes states that “Ojaide’s prose is decidedly plain, direct, and almost pedantic in style. He writes his essays with a simple logic that is built upon a series of carefully considered examples.”

Clearly, Dawes’s assertion translates into the merits of Contemporary African Literature: New Approaches. Each essay shares with the reader Ojaide’s fresh insight into topics that have never been covered by other critics of African literature. His cogent and scholarly examination of the African canon brings to mind a mild but conscious effort by him to act as one of the custodians of the continent’s literature. Although the issue of identifying and discussing an African canon might be considered far too ambitious, given the continent’s vast cultural fabric that includes the Arab cultures of northern Africa, which tend to be associated with the Arab literary traditions of the Middle East by Western scholars, Ojaide’s scholarly and authentic views remain valid and convincing.

The editorial guidance for these essays appears far superior to Ojaide’s past books, including Poetic Imagination in Black Africa, Ordering the African Imagination, and Culture, Society, and Politics in Modern African Literature, among others. As usual, Ojaide’s claims depend on his view that literature is a cultural production. The majority of the essays included here are predicated on the same view and much more. Also, each essay is carefully framed and guided by convincing examples. Where Ojaide’s statements appear to be polemic, he wins over his readers with plausible references linking approaches in contemporary African literature to globalization, environment, migration, conflict resolution, language, identity, and aesthetics.

Some of the topics in this book have never been examined in African literary criticism. The idea of the scholar-poet tradition and canonization in modern African literature are chiefly new areas of study that are yet to generate voluminous and critical scholarship. Contemporary African Literature is a useful contribution to the ever-growing body of African literary criticism. At its hub is the regard for much of what is shaping contemporary African fiction, poetry, scholarship, politics, oral traditions, and the challenges and prospects affecting the continent’s literary ethos. This book is a worthy read, and its panoramic view will leave any reader familiar with African literature, especially in the areas of poetry and fiction, with ample cause to appreciate Tanure Ojaide’s literary foresight and the merits of his scholarship.