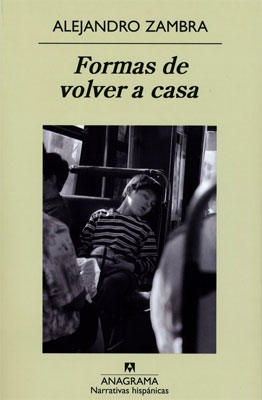 Formas de volver a casa, Alejandro Zambra’s third novel, is the logical continuation of his two previous works: Bonsái (2006) and La vida privada de los árboles (2007), in which Zambra explored the intimate narrative. The master of a focused and refined style, Zambra attains in this latest novel perhaps his most personal voice, one crafted in simple, unadorned language.

Even so, it is surprising to encounter a Chilean author such as Zambra (b. 1974), who after the great narrative projects of the Boom authors of Latin America has found a way to unite the political with the personal in such an unusual way. Formas de volver a casa constitutes a daring new look at the insipid side of military dictatorship: the story of the children of those parents who lived under the dictatorship; people who were nonpolitical; people for whom the Pinochet government was the nightmare of others, never for themselves.

The novel tells the story of an author who returns to the family home and to his former childhood neighborhood. There he finds Claudia, a former neighbor with whom he had been in love many years before. The reunion with Claudia explains many events from the protagonist’s past and how some of these have shaped his life in the present. The novel begins when the author as a child becomes lost and his parents are unable to find him. Getting lost and returning home become a recurring metaphor throughout Zambra’s novel: Who are the ones who get lost? Who are the ones who can or know how to return? To what place does one return? “Once, I got lost. I was six or seven years old. I was walking along, distracted. Suddenly, I couldn’t see my parents anywhere. I was frightened, but soon I found my way and arrived home before them—they were still looking for me, frantically. That afternoon I thought that they were the ones who had gotten lost. That I knew the way back and that they did not.”

Formas de volver a casa is in a sense the story of children, or more precisely about children settling a score with the past and with their own families. However, the journey to the past is unrewarding and difficult. It reveals the least heroic aspects of the protagonist’s life: he was not a victim of the dictatorship, and his parents most likely supported Pinochet. The past, which had previously seemed inoffensive, even trivial, becomes a threatening cloud under which the protagonist has to accept the futility of his present life, the absence of heroism, and the disenchantment of belonging to a middle-class Chilean family that did nothing more than survive in the dictatorship.

One of the great merits of Formas para volver a casa is that it is a book that no previous Chilean author has written about the dictatorship; a necessary and beautiful story that captures the complex experience of daring to face banality, which reminds us that sometimes what we find upon returning home is something we had not wanted to see in the first place, or at least not see so close up.