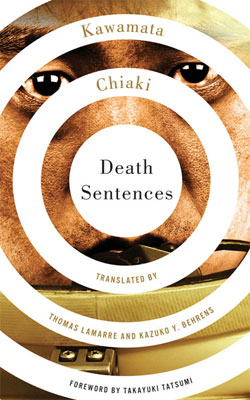 When Hu Mei gives Breton “The Gold of Time,” reading it will ultimately prove fatal. But first, Breton will unwittingly enable the poem to go viral, ultimately to precipitate death on an apocalyptic scale.

Lethal literature is a common conceit in the fantastic: the eponymous sanity-destroying play in Robert W. Chambers’s The King in Yellow (1895), the Necronomicon and other eldritch tomes in the tales of H. P. Lovecraft. But in Death Sentences, Kawamata Chiaki is up to something more subtle. The fate of those who suffer the narcotic experience of Hu Mei’s poem raises issues both metaphysical and ontological. For while the reading kills the body, it does something quite different to the soul.

Written in the style of a fast-paced airport novel, Death Sentences surprises with its originality and conceptual depth. For within this thriller about a plague of poetry lurk lacerating critiques of corporate militarism, of the capitalist conception of culture as commodity, and of the complicity of artists in what William S. Burroughs called “the control machine,” the mechanisms whereby power structures use language to create the “reality studio” in which we “marks” unwittingly live and serve.

Kawamata has been publishing fiction, criticism, and nonfiction since 1972. Death Sentences, his sixteenth novel, was published (as Genshi-gari) in 1984, promptly became a best-seller, and won the Nihon SF Taisho Award, the grand prize of the Science Fiction and Fantasy Writers of Japan. Subsequently, he turned primarily to military fiction, both historical and science fictional.

Kawamata grounds the early section of Death Sentences, set among the surrealists in New York and Paris, in fact. He brings to vivid life Breton, Marcel Duchamp, Antonin Artaud, and others, and even takes the title of Hu Mei’s killer poem from a key phrase in Breton’s The Surrealist Manifesto (1924), later inscribed in the epitaph on his tombstone: “I seek the gold of time.”

Were the later sections of Death Sentences equally resonant, the novel would be an unadulterated success. But in the long central section set in Japan in the early 1980s, the (fictional) characters seem flat, underdeveloped. And the conclusion, set at a far remove in space and time, feels rushed, as if Kawamata was so focused on melding his novel’s premise and themes that he neglected its other needs.

In spite of Kawamata’s stature and popularity, this is his first major work to appear in English. In addition to a fine translation, the University of Minnesota Press gives us a foreword by Takayuki Tatsumi that situates the novel in proximity to surrealism and Japanese speculative fiction, and an illuminating afterword wherein translator Thomas Lamarre unpacks the novel’s style and concepts.

My quibbles aside, Death Sentences offers an enthralling read that leaves lingering reflections about the power of words to affect the reality of readers, which, after all, is the essential enterprise of the literary arts.