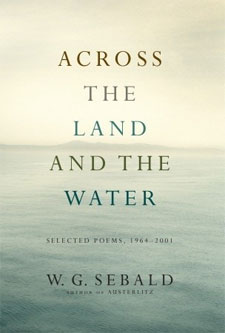 We know enough about translation to know that the poems of W. G. Sebald’s Across the Land and the Water are as much the work of prizewinning translator Iain Galbraith. Sebald has been particularly blessed by the quality and caliber of his translators. Michael Hulse, Anthea Bell, and Michael Hamburger have previously rendered Sebald so seamlessly into English that we’ve almost fallen into the habit of thinking of him as a British author. Galbraith’s timely book reminds us that he isn’t and, more importantly, underscores Sebald’s considerable achievements as a poet.

The volume presents Sebald’s poems chronologically, from his early student days in Manchester right up to his sudden death in 2001. Additionally, it includes some thirty-three poems gathered from unpublished manuscripts deposited in the author’s literary archives in Marbach, Germany. Not surprisingly, perhaps, Galbraith has chosen to omit all of the previously published poems from For Years Now (2001) and those in Michael Hamburger’s translations, After Nature (2002) and Unrecounted (2004).

One of the many remarkable features of the book is its developmental trajectory, clearly identified in chronological sections, from the short, abruptly contrapuntal lyrics entitled “Poemtrees” and the equally unexceptional “School Latin,” to the expansive narrative forms explored in the section that gives the book its name, “Across the Land and the Water,” and continued in the final section, “The Year Before Last.” It is a progression, Galbraith suggests, that was to culminate in the long, tripartite narrative poem “After Nature” (1988).

It is with the later poems that we notice some of the distinctive concerns that were to find further expression in Sebald’s prose: transports, both physical and spiritual, journeys and excursions through landscapes, crossings through time, of memories lived and retrieved from books and archives.

Unpunctuated for the most part, the poems lack even a full stop, suggesting a continuation of thought, perception, the unbroken journey itself. And though the journeys are often transnational, peppering the collection with place names of minor European towns and cities, even when the destination is local and the purpose domestic, Sebald leaps off imaginatively, as in the poem “Day Return,” on journeys within journeys: “The city sinks behind me / as I head home in the evening / reading Samuel Pepys’s diary / of the Great Fire of London // People taking to boats / many pigeons killed / panic on the river . . .”

Through landscape into history, and from the forgotten to the remembered. Sebald rarely travels with maps. His imaginings are discursive, ruminative, powered by a tireless curiosity. He is, as Michael Hamburger once observed, an author obsessed “with transitoriness and the interweaving of seemingly unconnected phenomena and events.”          The scene in “Day Return,” of Sebald pulling out of Liverpool Street station, reading Samuel Pepys’s diary, is one we will revisit in the closing pages of his novel Vertigo.

Galbraith’s copious endnotes, at over forty pages, reveal the textual sources from which his translations are drawn. They also throw considerable light on Sebald’s large and complex web of allusions to landscapes, place names, art and literature, and to other important points of historical relevance.

Across the Land and the Water is a book of genuine substance. Not only is it an invaluable addition to Sebald’s existing corpus, it is, for those as yet unfamiliar with his work, a perfect point of entry.