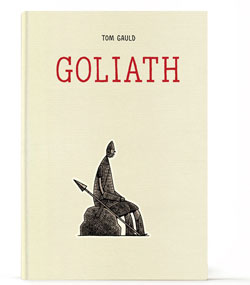 As the graphic novel has developed as a form globally over the twentieth century, one expectation it has rarely been able to shed is length. Especially in the United States, the landmark works have trended toward two hundred pages or higher. It’s not an unreasonable conclusion for the most casual reader to make. As the graphic novel is presupposed to transcend the comic book as a narrative unit, it only follows that the form should require more pages to deliver a story of literary complexity.

It is a telling sign of the graphic novel’s having reached a new stage of formal development that the market has produced some outstanding shorter pieces, taking on the task of delivering fully realized narrative experiences with fewer panels spent. An excellent recent example is Scottish cartoonist Tom Gauld’s Goliath.

Gauld’s approach to visual storytelling shares sympathies with hipster comics from Paris to Portland. His pacing is very relaxed, drawing the reader into the story at only its key moments and drolly allowing them to play out with the decompression of a Wes Anderson film. His drawing is very iconic—his characters almost reduced to geometry; his backgrounds, suggestive rather than descriptive.

This strategy might work against his ability to deliver a story of sufficient complexity in fewer than one hundred pages, but Gauld’s appropriation of a myth that is fundamental to Western culture pays rich dividends. By taking the David and Goliath story and reversing its narrative point of view, Gauld acquires a rich tapestry to draw from and upon without having to burn countless panels establishing place and character.

The result is an affecting tale filled with dry humor and just the right amount of pathos to give its foregone conclusion suitable weight to propel the reader from cover to cover. While Gauld’s subversion of Goliath’s story is light-handed, it does offer a moment’s pause to remember that history is written by the victor and that histories of those wars are driven by narratives that may not be descriptive of the experience of those fighting it. Whatever gravity one assigns to the book’s meaning, Goliath is an outstanding introduction to Gauld’s work and a graphic novel that will linger in the imagination well after its conclusion.

Rob Vollmar
University of Science and Arts
of Oklahoma