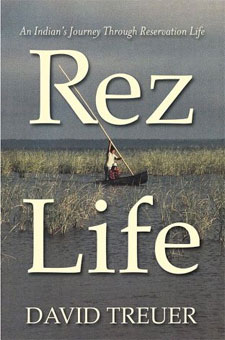 The cover of David Treuer’s newest book, Rez Life: An Indian’s Journey through Reservation Life, evokes the tough but rewarding work of gathering wild rice on what could be one of many Ojibwe reservations throughout Minnesota and Wisconsin. The photo is an apt choice because the same words that define the picture also describe his text. With a historian’s attention to detail, a documentarian’s keen eye, a novelist’s wit, and a son’s love, Treuer takes readers home to northern Minnesota.

What begins as a visit to his reservation, Leech Lake, evolves into a forceful and memorable critique of the people and policies that contribute to the modern reality of reservation life throughout the United States.

Treuer’s book includes many tales of loss and despair. He describes the suicide of his grandfather or the drug overdose, rape, and murder of a young girl at one of the neighboring reservations; however, Rez Life is far more than a collection of horror stories. Instead, it reads as a tour de force for those interested in key pieces of federal policy that created reservations and their famously poor conditions. Treuer covers more in three hundred pages than most Native Studies courses do in a semester.

While academics will find Treu-er’s work satisfying and concise, his text is successful because legislation is always secondary to interpersonal relationships. For example, instead of rehashing well-worn stories about battles over spear fishing, Indian gaming, or sovereignty, Treuer turns to other voices to help him solidify his arguments regarding these topics. He calls upon his mother and her experiences as a tribal court judge, his father and his time working for the federal government, and a tribal police officer at Red Lake reservation, among others. Each of their stories wraps around Treuer’s until the reader cannot help but notice how much he depends on these people to shape his vision of place.

Treuer makes his living as a professor, but this book proves that he is more than just a scholar, with a passion for his people and their language. In chapter 6, Treuer embarks on an extended discussion of the importance of language revitalization. He chronicles the work being done at an Ojibwe language immersion school in northern Wisconsin as he also contends that much of the beauty of reservation life exists and will continue only if Native people commit to language preservation.

At the outset of Rez Life, David Treuer says that he owes much to his family and his people. I think those who owe David Treuer the greatest debt are his readers. Although his sharp humor and sarcasm might be off-putting at times, in the end, Treuer’s book is a balanced meditation on reservation life that belongs on the shelves of serious scholars and avid readers alike.