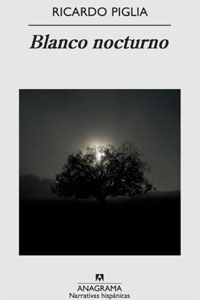 We are so accustomed to the proliferation of the detective novel in Latin America that in the last few years we have barely noticed that many of these novels scarcely conform to the historically imposed conventions of the genre. In Argentina, short-story writers such as Borges and Bioy Casares popularized the detective as a pure thinker, one who resolves cases by means of a complex system of deductive reasoning facilitated by keen intelligence. In Blanco nocturno, Argentinian author Ricardo Piglia (b. 1940) picks up the tradition but this time uses the foundation of the detective genre, which he then transforms—as in all his previous efforts—into an unmistakable “Piglian” novel. With Blanco nocturno, Piglia won the prestigious Rómulo Gallegos International Prize in 2011, awarded for the best novel written in Spanish.

Even though Piglia is one of the greatest proponents of the detective novel, it would be incorrect to classify him as a genre author. His narrative oeuvre, though not particularly extensive, is diverse enough to discount such an idea. Though Plata quemada (1997) can be ascribed without question to the detective novel genre, Respiración artificial (1980; see WLT, Spring 1994, 345) defies any classification. This time, after thirteen years without publishing, Piglia offers a volume that manifests all the characteristics of the genre but at the same time supersedes the classic model of the detective novel in the traditional Argentinian narrative. It is a novel that should be cataloged as an example of what Piglia himself calls “paranoid fiction.” “There should be a new kind of detective novel, paranoid fiction. Everyone is a suspect, everyone feels persecuted. The criminal is no longer an isolated individual, but rather a member of a group who has absolute power. No one understands what is happening, the clues and testimonies are contradictory and keep suspicion in the air because they can change with each perspective.”

The story in Blanco nocturno is told through several contradictory voices and points of view that flood the narrative with information, which has no evidentiary purpose and with clues that do not lead to the resolution of the initial proposed enigma. The story is the following: A Puerto Rican mulatto arrives in a village in the Argentinian countryside with a suitcase filled with one hundred thousand dollars. His name is Tony Durán. All indications are that Durán arrives in town in the pursuit of two beautiful women, the Belladona sisters, whom he met in Atlantic City, and with whom he formed a happy and hasty trio. A few weeks after his arrival, Durán is murdered in a hotel. The story becomes complicated: it involves a powerful local family, the Belladonas, a corrupt public prosecutor, and, in a way, the entire town. By the end of the novel, the first crime seems to have been a mere spark that set off a series of unpredictable events and turned Blanco nocurno into a place where each action has a double, an image that duplicates and distorts reality and can be read from only one point of view: paranoia.

Although Blanco nocturno on the surface appears to be a detective novel, Piglia has given himself the challenge of writing a work of fiction, where what is important is the exploration of what is left unsaid, of what is hidden, but not with the objective of resolving a crime, but rather of understanding—as with all great fiction—the complex machinations of human behavior.