Suddenly, a Knock on the Door, Etgar Keret 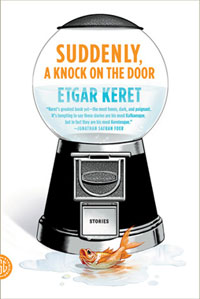 Some stories are hard to get out of your head, and Etgar Keret writes such stories. His latest collection brims with tales filled with sorrowful poignancy and sympathetic isolation. His telltale flare for the magical and the absurd is present here in such works as “Lieland,” in which a habitual liar enters a world populated by the characters from his and others’ lies, and “Unzipping,” in which a curious woman discovers a zipper under her lover’s tongue and finds a completely different man underneath when she pulls it (see WLT, Nov. 2008, 19).

But many of his characters in this work are average Joes who simply play out a few moments of their mundane lives for us yet succeed at revealing more about our own lives than if they had gone on a great adventure. One such tale is “Healthy Start,” in which Miron, a lonely man who eats his breakfast at the same café each morning, starts inviting strangers to his table and pretending to be whomever they presume him to be. As expected, this new habit ends in disaster when Miron meets with an angry man and pretends to be the lover of the man’s wife. Yet, as Miron is lying on the ground covered in blood after the man beats him up, he feels alive, perhaps for the first time. Keret shows us that we need the painful, horrible moments of life to provide the fertile ground for awakening.

Keret is more than your average storyteller—he is an acerbic social critic, with an imagination like fire. His insight burns all, but this destruction is precisely what paves the way for new growth. His identity as an Israeli writer is everywhere apparent, and he often uses his penetrating eyes to critique the politics of his region.

“Pick a Color” is, for me, the fullest embodiment of Keret’s poignancy, imagination, and cultural criticism. In this story, violence befalls the characters because of the color of their skin. However, this story is deeper than a tale of racial violence. It ends with the silvery god coming down to explain to the yellow priest that he did not want to create the world with such hatred and aggression. He is no sadist, but it is the only reality that he knows—he and his wife were themselves beaten by golden gods.

Life in this collection is allowed to be open-ended, as it truly is. Little is resolved, and much is permeated with uncertainty. “Creative Writing,” a story about a man who begins going to writing classes after his wife finds great success in them, ends with the man putting down his pen, and saying apologetically, “I don’t have an ending.” Keret, too, has no ending, but he also has no need to apologize. The only clear ending that life gives us is death, and Keret is more concerned with capturing life, though life filled with the sorrow of the presence of death.

The stories in this collection are analogous to the headstand pose in yoga practice: uncomfortable, unsustainable, even painful at times, but unrivaled in their power to help us see the world with new eyes.