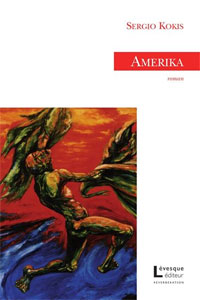 With a title that automatically evokes Franz Kafka’s unfinished first novel, Amerika provides a jarringly absurd version of the traditional immigrant narrative. During the first decade of the twentieth century, Waldemar Salis, the Lutheran pastor of an impoverished rural community in the Baltic region of Latvia, which was then a part of the vast Russian empire, seeks a way to improve the dismal economic lot of his flock—while heightening his own status (or rather his perception of himself) as a presumably visionary spiritual leader. Against the backdrop of the repression that followed the first (failed) Russian revolution of 1905, echoes of which belatedly reach Waldemar’s isolated small town, the pastor eagerly embraces an unprecedented offer of free passage, for himself and his churchgoers, to the promised land of modern times. Lured by enticing assurances of the availability of cheap and fertile farmland that will purportedly yield plentiful harvests and future prosperity, several families decide to accompany Waldemar on the long ocean voyage.

Even before the villagers start to make plans to abandon their homes, however, there are troubling signs as to the real nature of their proposed exodus and resettlement. The most important of these early turns of events is that the beguiling offer of free passage, without which the villagers could never hope to escape from their lives of grinding poverty, is not to the fabled l’Amérique, but to a country much farther south, of which they are only dimly aware, le Brésil. At first taken aback, Waldemar, who is as passionate about religion as he is about sex with both his young wife and his bewitching mother-in-law, endeavors to overcome the misgivings of the villagers, for whom the little-known Brazil does not hold the same promises of freedom and affluence as the famous America. Waldemar will ultimately be successful in the first part of his self-appointed task, to emulate Moses by guiding some of his reluctant followers across the water to a new homeland. Tragically, the lengthy and harrowing journey across the Atlantic will lead only to calamitous outcomes for most of them.

Born in Brazil, Sergio Kokis lives in Quebec and writes in French. In his latest novel, he blends biblical imagery with a wryly affectionate portrayal of life in a small village whose traditional social structures are brutally disrupted by the conflicting forces of twentieth-century modernity. In Kokis’s narrative of hesitant exile and looming disaster, the villagers are neither magnified nor cast as the embodiments of folk virtues. As for Waldemar, through his efforts at convincing his churchgoers to follow him, he is portrayed as at once a naïve idealist and a cool manipulator. Some of the best pages in this skillfully constructed novel are devoted to the recurring debates over the wisdom or folly of Waldemar’s project (while the verbal jousting is often metonymically associated with the silent struggles of chess games) between the fervently religious pastor and his warily rationalistic brother-in-law, the local schoolteacher. Through his portrait of a small Latvian community bound for Brazil, a promised land with its own potential for disillusionment, Sergio Kokis has produced an insightful account of the hopes and fears experienced by most immigrants.