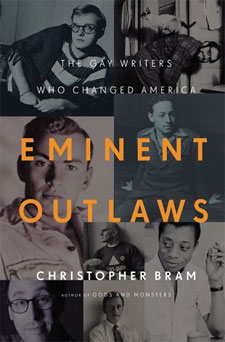 Something unusual occurred in American fiction around 1948: the love that dared not speak its name found its voice—soft at the beginning but growing increasingly louder. Gore Vidal’s The City and the Pillar (1948) appeared the same year as Leslie Fiedler’s influential essay, “Come Back to the Raft Ag’in, Huck Honey,” illustrating Fiedler’s thesis that in American fiction the female is an impediment to deep friendship between males. That year, Truman Capote’s Other Voices, Other Rooms also arrived, dreamily poetic and sexually ambiguous, except to those who understood that the kimono-wearing Cousin Randolph was not a typical male. Even earlier, gay-themed plays made their way to the stage. The main characters in Dorothy Baker’s Trio (1945) were a lesbian professor, her enthralled protégé, and a young man who tries to free her from thralldom. Today Trio seems as genteel as Henry James’s The Bostonians (1886) and as easily decoded. Shakespeare did not have to equivocate. In Troilus and Cressida, Thersites openly refers to Patroclus as “Achilles’ male varlet” and “his masculine whore.”

Theatergoers in the 1950s saw two radically different approaches to homosexuality: the 1952 revival of Lillian Hellman’s The Children’s Hour, in which Martha confesses her lesbianism and then commits suicide, as if she were punishing herself for her sexual orientation; and Tennessee Williams’s Cat on a Hot Tin Roof (1955), in which Brick’s beloved friend, Skipper, an unseen character, does the same after Brick’s wife, Maggie, forces him to confront his gayness. Although Brick insists that he and Skipper were just best friends, Brick doth protest too much, and Williams hoped audiences would realize it.

Allen Ginsberg did not have to resort to subterfuge or euphemism. In Howl (1956), he celebrates gay sex in language that makes Walt Whitman seem quaint by comparison.

Gradually, writers began to drop the mask. In Edward Albee’s The Zoo Story (1960), Jerry reveals that he had been “homosexual” and, from his actions, still is. All but one of the characters in Mart Crowley’s The Boys in the Band (1968) are gay—and the one who claims he isn’t probably is. In the AIDS era, there was Thom Gunn’s collection, The Man with Night Sweats (1992), a threnody for the plague victims that can only be read with pauses for reflection; Michael Cunningham’s novel, The Hours (1998); and especially Larry Kramer’s justifiably angry documentary-style drama, The Normal Heart (1985).

An erratum does not lessen my admiration for Bram’s impressive achievement. Bram claims that Gore Vidal’s screenplay about the Dreyfus affair was never filmed. It was; the movie was called I Accuse (1958), directed by and starring José Ferrer as Dreyfus.