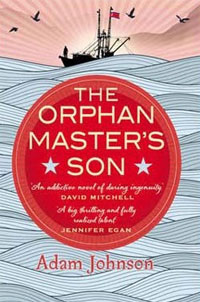 The Orphan Master’s Son follows Jun Do, a man searching for identity while succumbing to the impulsive and oppressive whims of the North Korean government. I already need to remind myself: this is a review of Adam Johnson’s modern Orwellian epic, not a highlight reel relaying the orchestrated horrors of Kim Jong Il’s living symphony. I wonder if Johnson had a similar struggle.

Although the novel’s protagonist, Jun Do, displays model citizenship, he finds himself a victim of the government’s calculated whims, including his frequent transfer among the county’s worst jobs—tunnel soldier, kidnapper, naval spy—before being sent to Prison 33, a prison modeled after North Korea’s present-day concentration camps.

What follows is a complex premise that introduces a nameless state interrogator who oscillates between his own story of struggle with his aging parents’ fear disguised as patriotism and the biography of Jun Do, who, in an oddly logical attempt to control his own identity, assumes the identity of Commander Ga, the nation’s most respected and highest-ranking war hero, in order to defy Kim Jong Il on behalf of the national actress, Sun Moon.

Of course, the story is peppered with hilariously absurd messages from the state’s propaganda loudspeakers blaring their version of Jun Do’s story (presumably the state’s altered version of the biography written by the nameless state interrogator) as the selected winner of the Best North Korean Story. In the narrative, Johnson speaks to his largest theme, the supremacy of national interests and propaganda over the individual: “Stories are factual. If a farmer is declared a music virtuoso by the state, everyone had better start calling him maestro. And secretly, he’d be wise to start practicing the piano. For us, the story is more important than the person.”

Although the first half of the book serves as a sort of prologue to the more interesting Jun Do / Commander Ga storyline, and nearly this much of the book is required before the story begins layering rich, satisfying implications and picking up any steam, it all ends at a dead sprint as Jun Do sacrifices the only identity he ever had for the sake of the only woman he ever loved.

At times, the sadistic governmental whims, Kim Jong Il’s character (even though Johnson said he toned him down to make him more believable), and the content of propaganda messages border on the farcical, but the story’s ability to elicit empathy makes the individual’s struggle for identity against an oppressive North Korea powerfully human and authentic.

As an aside, we certainly can’t ignore that Kim Jong Il is alive and well in The Orphan Master’s Son. Johnson expressed concern that Kim’s December 2011 death would demystify the legend (much the way Saddam Hussein and Muammar Gaddafi’s deaths did for them) before Orphan’s January 2012 release. But, he said, the secrecy surrounding Kim’s death only served to magnify the reality Kim had so meticulously manufactured.