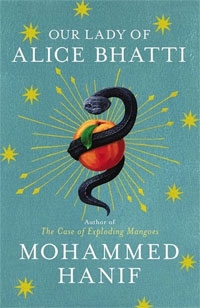 In his second novel, Our Lady of Alice Bhatti, Mohammed Hanif explores the relationships among caste, gender, and religion in modern Pakistan through his protagonist, Alice Bhatti. Alice is a Catholic nurse at a corrupt and crumbling Karachi hospital, Sacred Heart Hospital for All Ailments, and the daughter of a Catholic chuhra who travels the city curing ulcers by reciting Muslim prayers when he is not cleaning the sewers as a lower-caste worker. In coming to work as a junior nurse at the hospital, Alice seeks to surmount her caste and religious identity and find fulfillment through honest work.

However, at every turn of the novel Alice is confronted with the corruption and perversion that is indicative of Pakistani life today. While treating VIP patients, Alice is molested by the patients’ visiting relations. In seeking love, she finds herself married to a thug-for-hire of the local police, Teddy, who disappears for days at a time with his work. Even in his deep love for Alice, Teddy must give way to the perverse speculation and advice of his crooked superior, Inspector Malangi. When paired with the advice on marriage that Alice receives from her superior, Sister Hina Alvi, the couple falls, powerless, into a trap of distrust.

As if trying to work a thankless job and balance an unstable marriage to a Muslim man she hardly knows were not difficult enough, Alice finds herself suddenly engulfed in acts of divine intervention at the Sacred Heart. It is through the juxtaposition of human baseness and seemingly miraculous events that Hanif weaves his tale, thus exploring the bounds of humanity at both ends, in depravity and in divinity.

With a profession of love at gunpoint, a man severing his own thumb, and a laborious stillbirth, this novel is not for the faint of heart. The action of the novel steamrolls through to the end, thus keeping readers engaged through the last page, even if the novel does seem to end a bit abruptly. Once the action of the novel is concluded, Hanif includes a letter from Alice’s father that calls into question the nature of Alice as a person, a nurse, and a wife.

Much like E. M. Forster’s A Passage to India, Hanif ends the novel with more ambiguity over the very questions he begins with—namely, what roles truth and order have in current Pakistani life and whether or not Catholic and Muslim relations can find common ground. Although the novel does not conclude as neatly as Hanif’s first novel, A Case of Exploding Mangoes, it is just as well written. What’s more, the characters who comprise Our Lady of Alice Bhatti offer more dimension than their predecessors in A Case of Exploding Mangoes. Mohammed Hanif’s second novel proves to be a deep, gritty, and exciting addition to his literary career.