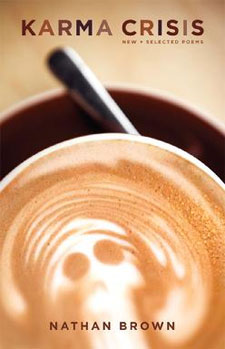 Even if you own the four early books that make up the “selected” portions of Nathan Brown’s “New and Selected Poems,” I recommend this book for the twenty-three new poems, the best of Brown’s career so far. These poems muster a mature voice and a finely focused pathos to offer delicately observed pictures of contemporary manhood.

Brown writes poignantly about fatherhood in poems like “Such Is Life,” which wittily narrates his reaction upon arriving to pick up his daughter and finding her playing Milton Bradley’s “Game of Life” with her mother and stepfather. Brown deftly captures the feeling of being demoted to a bystander: “And I am forced to sit by / and watch / until they are done.” The poet has made a metaphor for the whole of complex family life out of a little piece of it, a very effective technique, which he returns to for many of his best poems, including “Questions in the Wind,” in which a father-daughter visit to the cemetery stands in for watching his daughter mature daily in wisdom and in sadness. Every divorced father learns to let a handful of moments stand in for a whole range of experience. Brown’s contribution is to make that family compromise a poetic strength, to notice the poetry in noticing—desperately and tenderly—the moments passing.

Karma Crisis also offers strong poems about the poet’s bond with his parents. “As the Minister of Propriety and Fermentation” begins, “Mom hands me the list— / hand-written on the back / of church stationery.” Brown’s mother, the wife of a Baptist minister, has recruited the poet as a liaison to the local liquor store. The situation is funny, but the last lines—“someone beyond redemption— / to buy her booze”—say a lot, without spelling it out, about the relationship. The suggestion is rich, but not overwrought, which is very typical of Brown’s recent work. “Cotton-Picker,” for instance, begins with a vivid, understated account of his father’s childhood: “He picked cotton as a kid in Cyril / and pushed around cranky milk cows / over on the poor side of the tracks.” The poem develops from there into a story of sacrifice and a son’s respect for his father.

The new poems also include pieces inspired by the Declaration of Independence, a few on religious themes, and a couple that vividly depict the landscape and weather of the Southwest, all distinguished by a clarity and precision that makes them a pleasure to read. The best poems in the volume, however, are the relationship poems, which are emotionally raw without sacrificing craft. Karma Crisis begins with an epigraph from Stephen Dunn: “The good news is I know who I am; / that’s the bad news, too.” Brown certainly knows who he is poetically; these poems demonstrate a carefully cultivated poetics valuing communication and directness. But the epigraph applies as well to the emotional honesty that makes this Brown’s best work yet.