Sanctuary in the Wilderness: A Critical Introduction to American Hebrew Poetry, Alan Mintz 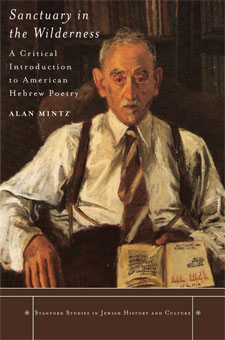 And so it is also with Sanctuary in the Wilderness. But this story is a story with a clear imperative: One State, One Language! Hebrew was always the one language of its people; so deep run the roots that there was never the question or clash of a national language atop or below the official one. Language is an ever-entrenched form of a nation’s behavior. Governments are known to change societal attitudes, or political trends, but the government of any society, particularly a free society, cannot change the linguistic culture so interwoven with a people’s identity.

Hebrew was ordained in biblical times, representing a clear historical sanction. Alan Mintz writes, “Hebrew poetry had to be engaged, militant, and public for it to remain not only relevant, but to lead the struggle. All aspects indeed of this poetic stream were mobilized in order to give expression to the transformation of lives and the electrifying consciousness of this ‘hour of becoming’ an intimate human visibility.” The young poets in early Palestine produced “convulsive realities of the moment” by composing shir parua (wild poems), “making the Wilderness intelligible.” The Russian epic (poema) emerged later and became popular. Later the sonnet predominated, written by American poets such as Friedland, Halkin, and others. This intellectual and creative group became the foundation of Hebrew poetry in America, and is still relevant. The issues shaping the debate between the Hebrew poets of America and the Hebrew poets of early Palestine emerged during the Yishuv, during the formation of the communities.

Two major styles of American Hebrew poetry emerged: the simple style and the metaphysical style. In addition, an important line of development evolved—the movement from the lyrical brief style to longer, narrative composition. There were also issues of open lines of communication for the American group, which by then consisted of such giants of Hebrew poetry as Simon Halkin, Abraham Regelson, Hillel Bavli, Ephraim Lisitzky, Eisig Silberschlag, and Gabriel Preil. This group of intellectuals and poets in America held the “will to believe” in humanism, in the self; indeed, it formed their mythology, their new reality of becoming, their episteme.

Immigrants from Russia wrote narrative poems in America about Native Americans in the Hebrew language. Literary epics such as Silkiner’s Mul Ohel Timurah (1910; Before the tent of Timurah), Efros’s Vigamim Shotqim (1933; Silent wigams), and Lisitzky’s Medurot do’akhot (1937; Dying campfires) are different, and yet all of the poems discovered are connected to what was Americanness. In this fascination with American Indians, poets discovered, connected, immersed, and dissolved into the American experience of immigration and European colonization. It was this distilled essence of America that the Hebrew American poets brought as an offering to Hebrew readership in Palestine. A new reality of becoming emerged. This new reality of becoming was the light in the wilderness, and it generated its own meaning and took hold. A new sanctuary emerged in the wilderness, which still continues to shed its light.