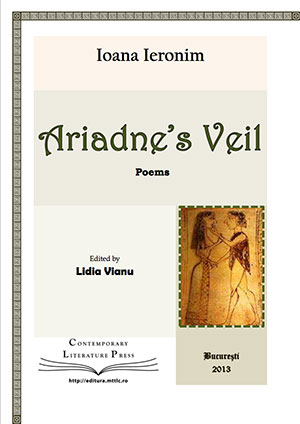 The story of Ariadne’s thread leading Theseus out of the labyrinth is a useful metaphor for the strands that bring this book to the reader out of what had been cultural obscurity.

First, although Ioana Ieronim established her reputation with poems written in Romanian—some of which, notably The Triumph of the Water Witch, were translated into English—in recent years she has written in English, a decision, or rather a process, she has described in Poetry International.

Second, publishers like Contemporary Literature Press (editura.mtt1.ro) are making available to an international audience work that previously would have only been nominally published. While the medium is less important than the message, it represents real progress for all writers and readers.

In the first half of Ariadne’s Veil, Ieronim plays variations on the myth. The Minotaur is killed offstage, but Ariadne’s memories of him blend with images of Theseus, whose identity, as well as hers, becomes less certain and more elemental as the sequence progresses—or rather proceeds, since the only real narrative line comes from the reader’s knowledge of the myth. At one point, Ariadne’s perspective is reduced, or refined, to a vision of “these things that one cannot speak,” perhaps drawn from “this sense before knowledge.”

These lines could be applied to Cristina Ioana Young’s lovely photographs, which for the most part accompany rather than illustrate the poems. But Ieronim’s poems are rightly the center of attention, further establishing her as a significant anglophone presence.