The Book of Legendary Lands by Umberto Eco 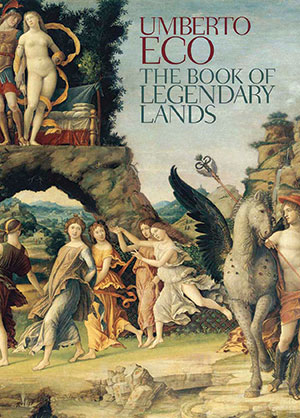 One only has to read two or three of Umberto Eco’s books to discover that he has made the study of lies and forgeries central to his work in both fiction and nonfiction. Eco is one of the most influential and popular public intellectuals in Europe. His thinking covers everything from semiotics to narrative structure, from Kant to popular culture. Eco is also a serious academic scholar whose work has influenced a generation of young scholars. And then, of course, there are his novels.

The Book of Legendary Lands is the fourth book in an ongoing series Eco is publishing with Rizzoli. Putting the merit of the text aside for the moment, these books, and The Book of Legendary Lands in particular, are beautiful artworks in themselves. The books are printed on high-quality paper and feature a number of spectacular photographs and illustrations. This collection is at home equally in research libraries as well as on coffee tables. Quite simply, they are centerpieces of thought and artistic expression. And although the books are fairly expensive (they cost just under $50 for a hardback), they are worth the investment by any self-respecting bibliophile.

The Book of Legendary Lands contains fifteen chapters, bookended by an introduction and comprehensive appendixes. Like the other volumes in the series, each chapter contains an introduction written by Eco and several textual and visual examples of the subject matter. This volume explores those lands that entwine the make-believe with the real. Whether it is the apartment of Sherlock Holmes, the house of Madame Bovary, the lands of Prester John, the ruins of Glastonbury, or the Dublin of Leopold Bloom, the relationship between the imaginary and the real has historically provided us with a sort of forged, altered map of the real as it emerged from the human imagination. As Eco states in his introduction: “In short, legendary lands and places are of various kinds and have only one characteristic in common: whether they depend on ancient legends whose origins are lost in the mists of time or whether they are an effect of a modern invention, they have created flows of belief.” These imaginary lands simultaneously inform and feed off of the “reality” from which they spring.

In his 1973 film, F for Fake, Orson Welles explores, among other things, the life of art forger Elmyr de Hory. At one point in the film, de Hory declares that, “If you hang a forged painting in a museum long enough it becomes real.” Our attachment to literature and its imaginary places can form our lives in fundamental ways. For some, places like Agartha, Atlantis, Uqbar, or even the Hundred Acre Wood are more real than a local supermarket. Eco’s book is a celebration of those imaginary lands of legend that have become essential to our lives.