Europe in Sepia by Dubravka Ugresic 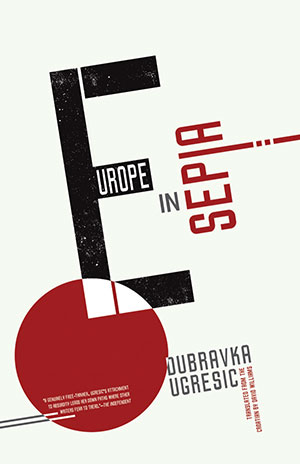 Since leaving Croatia in 1994, Dubravka Ugresic has penned sharp, darkly funny critiques of contemporary Western and global culture. But in Europe in Sepia, its title appropriately evoking a set of antique photographs, her “underground” humor turns darker still as she anatomizes the death of European and global “culture.”

Its three parts, each preceded by a well-chosen epigraph from Envy, Yuri Olesha’s early critique of both Stalinism and capitalism, record how materialism has made our world a megamall, peddling everything from art to “reality,” spirituality to suffering, breast-milk cheese to death-camp tourism. While trained on the globe, her lens highlights three main areas: the battered yet still macho Yugozone that Ugresic fled in 1994; the Eurozone, her physical “home” since 1994; and the No-zone, the mental space she inhabits, from which she sends these “messages in a bottle.”

Part 1, “Europe in Sepia,” laments the rise of that nostalgia, whether Euro- or Yugo-, that commoditizes even defunct and now-hated ideologies, turning culture into souvenirs. A dying Europe fears its East European immigrants, like the “invasive plants” in Dublin’s Botanical Gardens. But impoverished Croatia has a national “orgasm” of hero worship when freed Hague war criminal and murderer Ante Govina returns home: “How efficiently the confiscators of memory edit and erase.” Zucotti Square may signal revolt, with which Ugresic, a born rebel, sympathizes, but “Europe no longer loves life.”

Part 2, “Manifesto,” finds united Europe a ruin, its people grieving for what was. The West blames the East, which grumbles about its failed dreams: all are “eaten by envy.” Life reduced to simulacra, angry young “weapons of mass consumption” hunger for what is promised but ever beyond reach. And the information revolution, “the bloodiest of all,” causes greater damage to the soul than radiation to the body.

Some might find these essays elitist, even self-aggrandizing, betraying Ugresic’s own longings. Yet these acerbic, angry essays lay bare what shapes our world and ourselves: envy, greed, and the forces they unleash—anarchy and revolution. And as Ugresic states, “What was once a satire on a possible reality has today become reality.” So, finally, her scalpel cuts too deep for laughter.