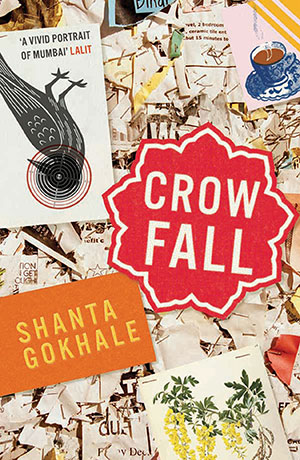 Shanta Gokhale’s Crowfall (originally in Marathi) starts with a paradox. Before she can begin telling her story, Anima, the central character, destroys the twelve volumes of her twelve-year-long chronicle of grief and nightmares that started with the mindless murder of her husband in the 1993 Bombay riots. “Free at last,” she mutters, after having shredded the pages.

The diary had also become her solace as she linked her fate with the historic violence of the partition of India, the killing of the Sikhs in 1984, and the 2002 riots in Gujarat. These events become the backdrop to the novel. In the foreground is a group of friends: Sharada, a musician; her husband, Shekhar; three painters, Haridas, Feroze, and Ashesh, who is Anima’s brother; and a supporting cast of relatives, retainers, gallery owners, gurus, and others. A parallel setting to Mumbai is Surgaon, where Anima’s family home is located and where her ailing mother still lives, while her idealistic father has gone missing. It is also the home of the Warlis, and this is the time that “Mumbai’s art world discovered Warli art” and shamelessly exploited it.

As a columnist and performing-arts critic, Gokhale speaks with authority on the city and its evolving culture. She speaks with no less empathy of the unique sensibilities of her characters. The nexus between artists, galleries, and art critics, a lucrative formula in the art world everywhere, is shown as a ringside spectator would see it. Vikram Shah, the business owner of Shosha, a suburban art gallery, intent on developing a hitherto neglected market, holds an art bazaar and seminars to educate the public, and lavish cocktails for the higher-ups. Gokhale achieves a fine balance between satire and appreciation of the genuine. She is equally at home in the world of Indian classical music, treating us to an informed critique of the intricacies of raags and gharanas. The arrogance and pettiness of the gurus is exposed as Sharada struggles to break free from “the rules of the guru-shishya tradition.” Even more hilarious is Gokhale’s take on the alliance of art, music, sex, and spirituality. Anyone familiar with modern Mumbai will recognize the operations of the fake, the unholy, and the pretentious.

Her one attempt at outright comedy left me desiring more. The MR Party, keen on local votes, builds a urinal. Here is the passage loaded with double entendres: “The urinal was built before you could say piss . . . and so it went on stream in style. When the inaugural ribbon was cut, ten strapping handpicked locals were lined up to pee. . . . The only regret was that, given the nature of their services, the press had published no pictures.”

At the conclusion, even as the closely meshed lives of the seven characters converge in Matheran to achieve a kind of equanimity, a tsunami is reported. Since Gokhale swings back and forth among their lives, the narration is somewhat disruptive. But it can also be seen as a montage of mixed plotlines, or musical movements, or painterly layering. Truly, this is Mumbai redux.