The Love Affairs of Nathaniel P by Adelle Waldman 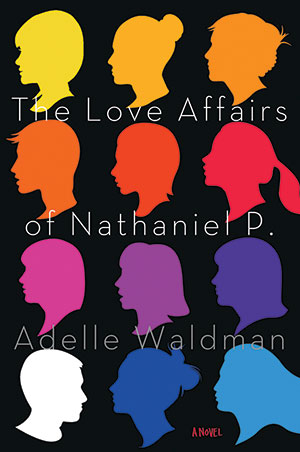 It is a timely question for the people of Nate’s generation, who are “product[s] of a postfeminist, 1980s childhood and politically correct, 1990s college education.” When you’ve been taught that neither sex nor pregnancy means you need to ask a girl to marry you—when, in fact, you know this response would be patronizing—what should you do when you have consensual sex with a girl and she gets pregnant? This is the first situation we find Nate in, as he happens upon Juliet on a crowded New York street. Nate stuck around and supported Juliet through the abortion. But he wasn’t in love with her, so he stopped calling. Does this, as Juliet claims, make Nate an asshole?

Since Adelle Waldman places this question up front, it accompanies Nate throughout the novel as he grows from nice-but-used teenager to Harvard outcast to thirty-year-old Brooklyn intellectual. Nate’s transition is the first of two places where the novel excels. It imbues Nate with a real sense of humanity, and, with the question of morality planted in our minds, it gives the novel a good narrative pull. We want to know how Nate morphs from nice adolescent to semisuccessful jerk.

The second excellent aspect of the novel is the rich detailing of the young, intellectual Brooklyn social crowd in which Nate runs. Having learned to side with the proletariat even as their wealthy parents spent hundreds of thousands of dollars on their educations, they are introspective enough to recognize this inconsistency and are appropriately conflicted. It’s a social group ripe for literary squeezing, and Waldman squeezes with humor and humanity, giving Nate richly developed friends who help keep the novel entertaining at every turn.

That we never know exactly how much sympathy we should afford Nate works in the novel’s favor at the beginning but becomes more of a problem as the novel begins to focus on the relationship Nate starts with Hannah. For as much emphasis as Waldman places on this relationship, and for as well as she develops Hannah, it soon becomes the weakest part of the novel. Their relationship’s slow decline is painstakingly rendered. After their inevitable split, Nate moves on to Greer and ends the novel in contentment. That’s nice for Nate, but it left me baffled. Why was so much emphasis placed on Nate and Hannah’s relationship if there was nothing more to learn from it than that they just weren’t right for each other? Since Nate finds happiness, the timely moral questions posed at the beginning of the novel may seem irrelevant by the end. But these questions remain significant; the first two-thirds of the book stand as a lively testament to that fact.