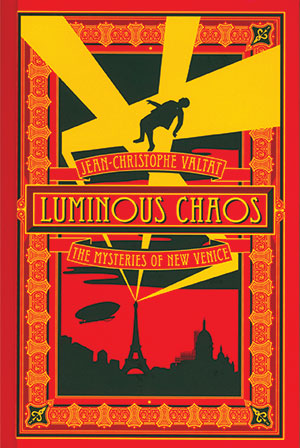 Luminous Chaos is an enchanting twist on the steampunk novel and serves as a powerful sequel (and, in many ways, prequel) to Jean-Christophe Valtat’s earlier success, Aurorama (see WLT, Jan. 2011, 69). Initially set in the fictitious city of New Venice, a Victorian city just south of the North Pole, the novel’s eight protagonists quickly find themselves accidentally transported through time and space back to Paris, 1895. Through a sinister plot by the newly elected regent-doge, the former regent-doge Brentford Orsini and his collage of colorful companions wind up in 1895 Paris instead of arriving in contemporary Paris to fulfill their mission as an embassy of New Venice. Brentford and his friends are trapped far from home in more ways than one and realize that if they are ever to return home (a home that does not yet exist), they must not only figure out how to go forward in time and space, but they also must protect the future founders of New Venice from the forces that seek to destroy them.

The novel brilliantly merges historical and literary fiction in 1895 Paris with futuristic science and a dash of magic to top it off. The chapters alternate between the voices of the seven characters of the Most Serene Seven, and the story is told as a jigsaw puzzle of the experiences of these seven characters that fit together to make a complete picture. The plot is packed full of everything you could ever want in a good novel: suspense, action, murder, romance, intrigue, and more. It is over five hundred pages long, but it is a rapid-paced page-turner that ends far too soon.

The story stands alone from its predecessor and serves as an enjoyable read, even without the helpful background of Aurorama. The language of New Venice and the mystical and scientific vocabulary can temporarily leave the reader feeling as if there should be a Luminous Chaos dictionary, but Valtat quickly comes to the rescue to illuminate the missing pieces of information that are necessary. As the novel’s wizard says, “And that’s the trouble with magic, it always sounds like hogwash when you try to explain it.” Your patience will be greatly rewarded with an imaginary world that seems almost real enough to travel to, if only one could travel that far back in time and space.