The Joy of Pain: Schadenfreude and the Dark Side of Human Nature by Richard H. Smith 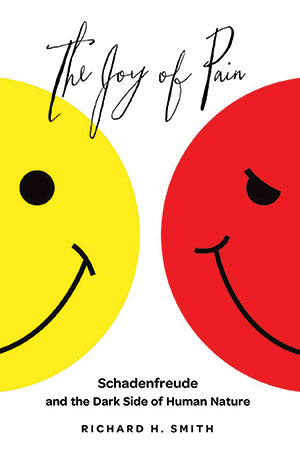 Schadenfreude, the act of taking pleasure in another’s pain, is the subject of University of Kentucky psychologist Richard H. Smith’s slim new volume, The Joy of Pain. Though Schadenfreude seeps into every aspect of our daily life and culture, conscious acknowledgment of the emotion often escapes us. The Joy of Pain is here to help us identify the why and how, not only of this specific emotion’s prevalence, but also its paradoxical elusiveness.

Indeed, there is no English equivalent for schadenfreude, which means “shameful joy” in German; a state of being that Smith attributes to people’s tendency to not want to acknowledge their own schadenfreude. With deftness, Smith moves from chapter to chapter, carefully uncovering this complex yet common emotion using every means imaginable at his disposal.

Smith keeps the content rather light for nonpsychologist readers. He props up his arguments with examples from American pop culture, professional sports, history, politics, literature, philosophy, psychology, biblical parables, and personal anecdotes. One of the most memorable chapters, titled “Humilitainment,” focuses on the phenomena of mass schadenfreude through pop culture, particularly in American reality television of the mid- to late 2000s.

Everything from The Simpsons to Emmanuel Kant is used to dissect the great prevalence of “shameful joy” in human nature. Not only does Smith successfully show the prevalence of schadenfreude in American culture, but he also takes steps toward explaining the emotion’s simultaneous elusiveness in our everyday awareness.

Along the way, Smith grapples with what to make of this primal emotion. He concludes that taking pleasure in the misfortunes of others is all too natural but harmful if not acknowledged and kept under control.

Smith makes this journey into the darker tendencies of human nature an accessibly rousing read. Probably best serving as a gateway to more in-depth psychological writings, The Joy of Pain is nevertheless a well-thought-out, researched, and enlightening book on the nature of one of the most prevalent, complex, and least-studied human emotions.