Pastoral in Palestine by Neil Hertz 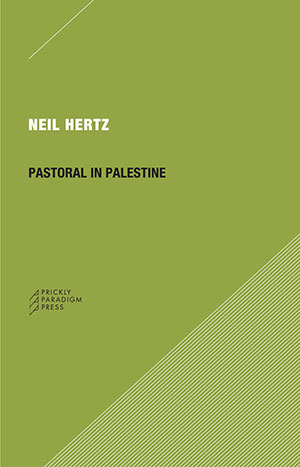 In the late winter and spring of 2011, Neil Hertz (literary critic, photographer, and professor emeritus in Johns Hopkins University’s English department) lived in Ramallah and taught just outside of East Jerusalem at the Abu Dis campus of Al-Quds University in a collaborative program developed by the university and Bard College. Pastoral in Palestine was written during and in response to that experience. It is travel literature, social commentary, and political commentary all in one. Alternately tragic, humorous, and discerning, it reveals as much about life in the Occupied Territories of the West Bank as it does the author. The author’s fondness for literary allusions (a habit of mind, given his training), apt comparisons to life in inner cities in North America, and insightful observations (as a serious tourist might make) are riveting. Yet he makes no definitive pronouncement in the work, advising, “I leave the judgment of the pertinence of these accounts to my reader.” Though a slender volume (122 pages), with photographs he himself took and a few from the Internet, it is weighty in its effect.

Hertz begins this work with an observation of the water tanks on top of Palestinian houses—Israeli-owned homes receive continuous water supplies while Palestinian homes might receive water only 50 percent of the time—hence the need for the water storage tanks. As any other good tourist might do, he queries Palestinians and Jerusalemites alike in search of meaning and perspective. He discovers that “potential matters of fact are surrounded, in common conversations on both sides of the frontier, by a haze of half-baked understandings and misprisions.” Thus, he establishes two of the ongoing themes of the work in the initial pages: the gulf between those in power and those lacking power and the misprision of an ethical crime (intentional or not). In the end, he discloses that neither side expressed much hope for a solution to the appropriation of Palestinian land or water; rather, “It is The Situation. One lives with it, although it has been corroding both societies.”

The title of the work is indebted to a housing-industry phenomenon that attracts European and North American Jews to properties once owned by or crafted by Arabs. Hertz includes a photograph of a “for sale” sign (brandishing the description “Arab Style”) in this section of the book. Unpacking its meaning, he writes: “We have taken back from them what was ours in the first place. This house is valuable because it is ‘Arab’—and all the more desirable because you can live in it without having to live with . . . Arabs as neighbors.” The ironic tone is sustained throughout the work. In an earlier passage Hertz recounts his introduction to one of the vice presidents of Al-Quds University. The administrator wished to know what his qualifications were to teach courses in urban studies. Hertz replied, “Twenty-seven years in Baltimore.”

Ever the educator, the work includes a solid list of suggested readings on the topic. Additionally, he draws interesting parallels between Palestinians and the residents of West Baltimore, Maryland. When asked if he might produce similar works in this vein, Hertz responded, “You are only innocent once.” He subsequently explained that his was “the response of someone looking around in a strange place for the first time. Second time around, one is expected to have learned more about the situation and to write with more authority.” Regardless of one’s views on the subject, this book inspires conversation.