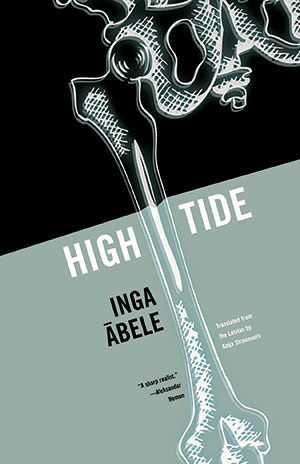 High Tide is a challenging novel. It is not easy to read—the action jumps from present to past, then from past to present. And indeed, as the reader reaches the final page, she realizes that she could have begun on page 310 and read backward. It might have been easier. Reminiscent of the way that some Latin American novelists wrote during the decades of the Boom (1960s–1970s), Inga Ābele takes the reader on something of a magical mystery tour. The time periods and the spaces wherein the action unfolds are not always clear to the reader, and at moments I felt elements of frustration that manifested themselves as quizzical head-shaking. Yet by the end of the novel it is clear that High Tide deals with the life of the main character, Ieva, from her realization of what life is all about to her birth, including everything in between—albeit back-to-front in time and space.

Ieva, her husband, Andrejs, and her lover, Aksels, form a core trio of characters. On the periphery, the reader also meets Ieva’s mother; her daughter, Monta; and, to a lesser degree, Ieva’s brother, Pavils; his wife, Vita; and their daughter, Laura, all of whom play a part, however small, in the development of Ieva’s psyche as well as the direction she takes in her life. Married young to Andrejs, Ieva meets her soul mate, Aksels, after the birth of Monta. The relationship is doomed to fail as it is clear that Ieva and Aksels are co-dependent and unable to establish a satisfying environment for themselves or Monta. After he is diagnosed with cancer, Aksels begs Ieva to kill him rather than leave him to suffer. With this intention in mind, she asks Andrejs to drive them into the country, which he does, but when the moment to pull the trigger arrives, Ieva is unable to do it, so Andrejs shoots. Jailed for the murder, Ieva feels an obligation to visit him, which does not allow her to either reinvent herself or simply pick up her life and move forward.

Ieva’s angst—which the reader perceives throughout the novel—is the same angst felt by so many people throughout history but particularly in the modern world of changing dynamics where the unexpected intrudes into our lives, preventing people from fulfilling themselves completely. Although disjointed and fragmented, the novel serves its own purpose as a vessel for the protagonist to express herself in a combination of ways: via letters, internal monologues, and actual conversations.

The reader would do well to go back and start again once finished with the first reading as there are unanswered questions that could be resolved by a second read. As it is, the novel begins and ends with a dream—not the same one at either point—but as a technique to tie the end to the beginning or the beginning to the end, in a circular motion. In fact, there is something of a dreamlike quality weaving itself all throughout the novel. Even the title, High Tide, lends itself to speculation about the characters’ fate as the tide rolls back to sea.