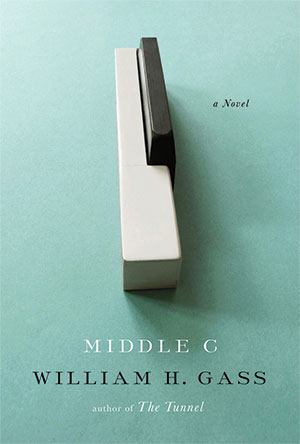 The protagonist of Middle C is one Professor Joseph Skizzen, head of the music department at Augsberg Community College, later Whittlebaurer College. As a boy, he was moved from Austria to England in the 1930s, the family assuming the guise of Jewish refugees, ahead of what his father sensed would be a catastrophe. After the father decamped to America, Joseph and his mother were relocated to the Midwest, where Joseph found that being Austrian and at least nominally Lutheran helped secure an academic position. Championing the music of Arnold Schoenberg was timely as well.

His private obsession is located in an attic workroom pasted with clippings of massacres and gruesome crimes seeming to affirm that catastrophe is normal, that humanity itself is a catastrophe. Instead of writing learned articles on his favorite composer, Joseph meditates in his attic and endlessly modifies a doomsday sentence that originally reads, “The fear that the human race might not survive has been replaced by the fear that it will endure.” All might be well if the professor were able to quit circling this one sentence. While the boy and man built an enviable reputation on his ability to ingest books and music, the attic man seems stuck in a purgatory of repetition.

The problem a reader confronts is twofold: Skizzen’s condition is established early, with flashbacks to bring him to the present. What is not brought to the present is an explanation for his anal-retentive habits. He was a youth with some extraordinary talents who has not achieved. Described as he is from the outside, thoughts and material activities named, often as catalog lists, Joseph Skizzen is known and unexplained, known and uninteresting.

The lack of enduring personal relationships is troubling. As a professor at a small college, he should be in close contact with a number of students. Then there are the faculty and committee meetings and, often, expected social events with colleagues. Such encounters are almost completely absent.  Possibly the academic sections are fantasized, which explains the lack of context while undercutting the ground for the shreds of satire that emerge. Referencing Candide calls attention to a difference.

I speculate that William Gass, like Aldous Huxley in Point Counter Point, was attempting a moderately musical structure to support a “novel of ideas.” The lectures certainly start and end with a main theme, framing digressive variations in the middle. Given the protagonist’s specialization in twelve-tone structure, perhaps it is not surprising that chapter events may reverse, flashing backward in time, sometimes to a dramatic scene leading to an event that has already concluded—and really of no consequence.

Middle C ends up being a novel of scenes and topics, sometimes brilliantly performed, set within a life-plot that has little energy.