A Life Worth Living: Albert Camus and the Quest for Meaning by Robert Zaretsky 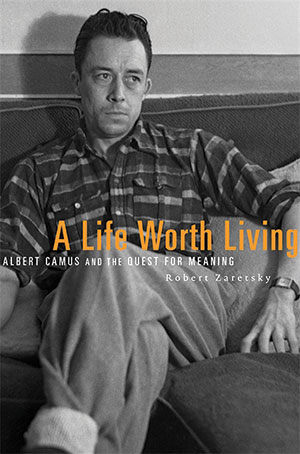 A Life Worth Living is Robert Zaretsky’s second book on Albert Camus in five years. Like his previous book, Albert Camus: Elements of a Life (see WLT, Mar. 2013, 74), Zaretsky once again gives us a concentrated, wholly enlightening and insightful study on the life of this complicated writer and man. Zaretsky’s books on Camus read more like critical biographies than they do literary criticism, and that’s a good thing. Zaretsky’s writing style is easy to follow yet scholarly and informed. Both books are relatively brief and can be read in a day or two yet thought-provoking enough to keep the reader pondering for a long time. Both are essential to the critical and popular scholarship on Camus.

A Life Worth Living examines Camus as a moralist, paying particular attention to his silence on the Algerian problem and his very public fallout with Jean-Paul Sartre. In addition to a prologue, epilogue, notes, and an index, A Life Worth Living contains five chapters: “Absurdity,” “Silence,” “Measure,” “Fidelity,” and “Revolt.” Each chapter makes seamless use of Camus’s writing and the historical and personal contexts in which he found himself at the time.

Zaretsky points out that Camus never thought of himself as a philosopher. He suggests, instead, that Camus was a writer who saw in himself a moral obligation to speak out against the injustices of the world. In addition, Zaretsky compellingly writes: “Celebrity may have been thrust upon him, but Camus was not an accidental public intellectual.” Camus was a man who in fact sought the spotlight. Even his look was carefully calculated to add to a constructed persona. Today we talk about the look of Camus just as much as we talk about his work.

Having marked the centennial of his birth in 2013, the complicated figure of Albert Camus comes back to us in resonant ways through Zaretsky’s book. Camus suffered for his work and his ideas. His slide into silence, Zaretsky points out, was an inevitable outcome of the work of a true moralist. “He was a moralist who insisted that while the world is absurd and allows for no hope, we are not condemned to despair; a moralist who reminded us that, in the end, all we have is one another in an indifferent and silent world.” Camus’s own views on the subject can be read in the recently translated Algerian Chronicles, also published by Belknap and a worthy read in itself.

Zaretsky demonstrates in a Life Worth Living that Camus’s life was plagued by complications, both physical and psychological. To his credit, Zaretsky does not set out to demystify Camus but to trace an arc that runs throughout his life and work that in turn does function to demystify the man, if only slightly. This is a wonderfully written and expertly researched companion to Zaretsky’s previous book on Camus. Taken together, Zaretsky has proved to be one of the most honest and thoughtful critics of Albert Camus.