The Ocean of Mrs. Nagai: Stories by Sharbari Zohra Ahmed 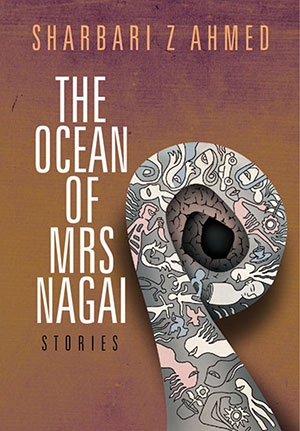 Sharbari Ahmed’s debut collection of short fiction, The Ocean of Mrs. Nagai: Stories, took her fifteen years to complete, including two years in graduate school at NYU where she earned a master’s degree in creative writing. The long execution of this collection of eight stories is reflected in the fact that there is never a tone of repetition or a sense of similarity in the plots or the protagonists of each of the pieces. Sharbari’s literary profile spreads over performance, film direction, scriptwriting, and teaching creative writing, but it seems as if the only task Sharbari was perfectly poised to do was write short fiction.

Sharbari sets out to deconstruct the subtlest of shades that make up the myriad experiences of South Asians. She draws delicate linkages—backward, forward, sideward—establishing repeatedly how an external and politically extravagant exhibition of ideology affects the behavior and anticipations of common immigrants. The perceptions of the characters, their personalities, even their tone of humor and the physical settings they are juxtaposed against have been polished to appear as if eight different authors with strong and weak Bangladeshi connections have crafted each tale in varying chronology.

The collection opens with “The Ocean of Mrs. Nagai,” set in present-day Tokyo. Mrs. Nagai, the seventy-eight-year-old wife of a politically prominent war hero, Shimizu Nagai, plays host to a young cosmopolitan couple, Nyla and Sam from New York. As Mrs. Nagai spends the day taking the Western couple around Tokyo, the conversation around Japanese history and culture creates mild tension among the characters and evokes in Mrs. Nagai horrid memories of World War II and the possible atrocities committed by her husband in particular and by the Japanese at large.

The following pieces, “Pepsi” and “Raisins not Virgins,” are both extraordinarily unconventional in their topic of narrative. “Pepsi” follows the life of ten-year-old Zara, child of a diplomat father and a socialite mother in Addis Ababa. Friendless, nerdy, and ignored by her parents, Zara wanders off to play with children from the neighboring shantytown only to find herself in the thick of a class struggle. In “Raisins not Virgins,” Sahar Salam, a young Bangladeshi American in Manhattan, finds love in Rizwan, a lawyer with a similar cultural background, only to lose him to a jihad in the Middle East. A screenplay of this story was selected for the All Access Program at the 2008 Tribeca Film Festival.

Sharbari’s characters are im-mersed in this endless cycle of being lost and found—like Ella, the adopted Bangladeshi American protagonist in “Wanted,” or the middle-aged Laura in “Foreign Exchange” who is coming to terms with her daughter’s homosexuality and consequent murder in Bangladesh.

The common thread sewing Sharbari’s unpredictable collection together is the fantastical chance encounters that the most ordinary and apolitical of people—immigrants, spouses, children, artists, academicians—have with historical and global events.

The Ocean of Mrs. Nagai was published by Dhaka’s Daily Star Books in November 2013 and released at the Hay Literary Festival in Dhaka in 2013.