The Merman’s Prayer and Other Stories by Syed Manzoorul Islam 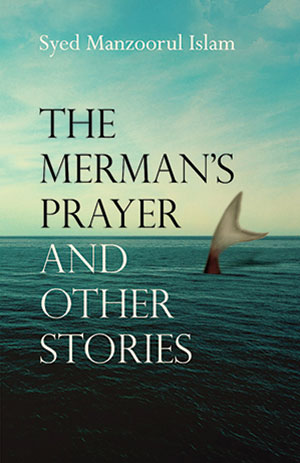 The first thing that strikes the reader who encounters the stories in this collection is the narrator’s role: how he talks to readers and plays with their expectations, dropping frequent hints in the process that this is a story he is a part of, or has received in a dream, or heard from a friend, or witnessed in his community. The narrator rarely pretends to be omniscient; he is often confused and can’t seem to locate his place in the narration. He is familiar with all the major players in a story. Irony and humor are inseparable traits of his stories, as in “The Two Assassins.” Yet his narration has conspicuous resemblance with Bengali oral narratives wherein fairies and winged horses are as real as anything else in the material world.

The narrator’s intention is all too clear: he is not offering reality as it is—he’s offering a world that defies reality or, to be more exact, manipulates it, to re-create fresh new possibilities and new realities for his characters.

His characters come from all walks of life, from workers to abused women to those belonging to the middle class. Only their actions and reactions surprise us. They are victims of real life but refuse to give in to societal pressures. Sultana, the female protagonist in “Parapar Hotel,” had been forced into prostitution by a certain police officer and was privy to many secret crimes committed by the city’s political big guns. They feel threatened by her and want the police officer to get rid of her. Sultana, however, senses this well before and turns the table on the officer in such a way that he and his cohorts end up getting wasted instead.

Magic plays a vital role in the narrative. In “Living Dead,” the soul of a young man is released from his body while he’s been in a coma to find out how he is missed, but what he experiences is hard truth: everyone has just forgotten him, and even his mother eventually forsakes him. In the title story, “The Merman’s Prayer,” a man steals a large sum of money from his employer and escapes to a seaside town to hide. But there he is enchanted by a mermaid. When the real world is about to close in on him, he turns into a merman and swims away into the sea in his search for eternal solace.

Syed Manzoorul Islam, in his three-decade-long literary career, has mastered a style that sets him apart from many of his Bengali contemporaries. While surreal experimentation is not rare in Bengali literature, his open-endedness, self-reflexivity, and blend of pathos and humor have given a solid foundation to postmodern tendencies in Bengali fiction.

This is Islam’s first collection of short stories in English. A professor of English at the University of Dhaka, he himself has translated all the stories, which makes him, perhaps, the only bilingual Bangladeshi author writing today.