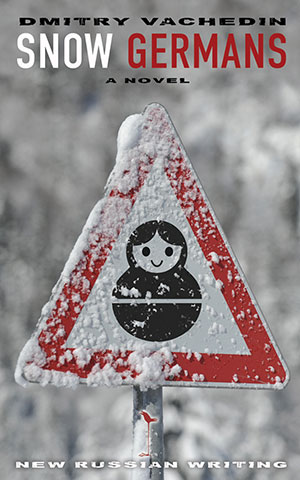 Russian literature’s geography, traditionally focused on the capitals and the surrounding countryside, has expanded dramatically in recent years. Many of today’s most interesting Russian-language voices hail from far-flung regions like Dagestan (Alisa Ganieva) or Kaliningrad (Yuri Buida). This debut novel from Dmitry Vachedin, an émigré writer living in Germany, adds another name to this list.

Snow Germans is built on three beautifully differentiated narrative voices, conveying diverse and moving transnational experiences between Russia and Germany. The character-narrators are all what Vachedin calls “snow Germans”—ethnic Germans with complex family histories in Russia, who are now residing, once again, in Germany. Nevertheless, they have not completely left behind their Russian experience, both nostalgic and haunting, including persecution during World War II, the battle of Stalingrad, and forced migration to Kazakhstan.

The novel’s plot brings these characters into one anothers’ orbits, but Vachedin resists the temptation to herd them into one room for a grand culmination. Instead, the narrators remain loosely connected nodes in a greater phenomenon that this novel only starts to explore.

Valeria, who moved to Germany as a child, begins to feel disenchanted with her adopted homeland. When she meets a young German girl in need of advice on dating a Russian man, Valeria is all too eager to dispense nostalgia in the form of counsel. As she advises the German girl, her reminiscences draw her back to St. Petersburg, where she hopes to recover something Germany lacks.

Meanwhile, Mark, whose family has been in Germany for generations, pines over a girlfriend he lost to a Russian rival. His teenage melancholia, which Vachedin renders in pitch-perfect histrionics, leads him to join a press junket to Russia. There, his immediate reactions provide some of the book’s best lines, and eventually move him to view himself and Russia differently.

The third narrator is the Russian man who stole Mark’s girlfriend. A veteran of the Chechen war, Andrey returns to Russia after his army buddy has died. St. Petersburg alienates him from German life (and from his German girlfriend) and yet does not invite him to stay.

The diversity of Vachedin’s narrators—in age, gender, and nationality—presents him with no small challenge, but his economical, mature prose is up to the task. He manages to show his characters’ level of comfort or alienation in each culture with a single word or pithy phrase. When Valeria first arrives in Germany, for instance, she finds her family’s new apartment “derisively spotless,” or when Mark arrives at his hotel in Russia, he can “hardly believe human beings had built this for other human beings.”

Each narrator’s voice is arresting and completely independent. Toward the conclusion, the novel’s voices diverge, pulling the book, refreshingly, toward entropy rather than dénouement. Unfortunately, Vachedin ends with a somewhat overwrought meditation on the history of Russian-German relations, which does not seem to flow organically from any of the characters’ voices or experiences. Despite this slightly stilted ending, Vachedin’s prose style and his ability to understand and convey diverse experiences make Snow Germans a pleasure to read and Dmitry Vachedin an author to follow.