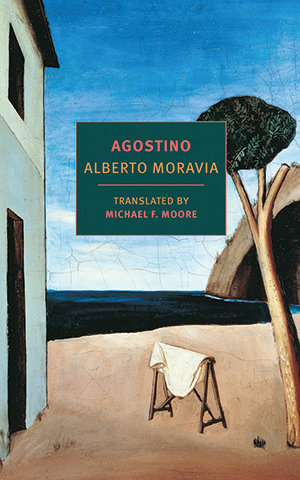 Alberto Moravia (1907–1990) is a writer who deserves to be more widely read than he is these days. The author of countless books depicting the Italian experience during and after World War II, Moravia was a giant of modern Italian literature. The latest of his neglected classics to be retranslated into English is Agostino. It is the third novel of his to be retranslated and published by New York Review Books following Boredom and Contempt. First published in 1944 but written in 1942, Agostino failed to pass muster with the Fascist censors.

The plot of Agostino is straightforward: a thirteen-year-old boy is on summer holiday with his widowed mother. Each day the boy takes his mother out in a rowboat. When the boy’s mother begins to engage in a relationship with a young man she meets on the beach, Agostino feels neglected and abandoned. In order to fill the void left by his mother, and perhaps to get back at her in some way, he takes up with a ragged group of boys and their suspect elder companion, Saro, a lifeguard at the beach. The reader should not mistake the simplicity of the plot for an underdeveloped or pedestrian narrative. Agostino is replete with all the themes so central to Moravia’s work: conjugal love, possible incest, transgression, and lost innocence, to name a few. In just over one hundred pages, Moravia is able to explore the painful coming-of-age of a boy who discovers that his mother is a woman first and a parent second. As his illusions of her begin to shatter, he finds himself adrift in a sea of conflicting emotions, so much so that he can barely stand to be in the same room with her. “As can happen, the place of these discoveries and conflicts—his home—soon became unbearable.” In a truly Freudian vein, Agostino’s first sexual awakening may be triggered by his mother.

Perhaps the biggest hurdle contemporary readers will have with Agostino is the behavior of the protagonist himself. Agostino acts and speaks in such a way that it is easy to think of him as a much younger character. In fact, I had to remind myself several times that he was thirteen and on the verge of manhood, at least biologically. However, we would do well to keep in mind that Moravia wrote this in the early 1940s, when the world was a much different place. Childhood is no longer as drawn out as it used to be. Despite these differences, the universal themes of boyhood still apply. Agostino must reconcile the fact that the person he knows best is both a mother and a woman, making her simultaneously familiar and strange.

Michael F. Moore has given us a wonderful new translation of a classic coming-of-age story set in the modern world. His translation is seamless and loyal to the original yet updated enough to appeal to contemporary readers.