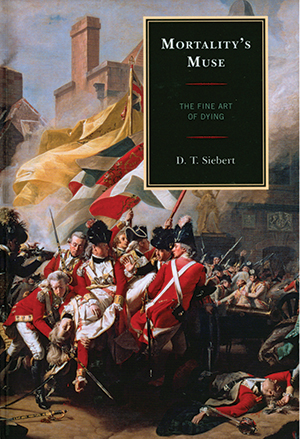 Mortality’s Muse is a rare book: thoroughly researched, genially delivered. The best—or the most striking—of what has been thought, said, and represented by humans about the onset of death and the act of dying itself. On the one hand, it is what used to be called a commonplace book; on the other, the contextualizing and commenting by D. T. Siebert have the air of a good conversation. In chapter after chapter, one turns to this formidable subject with pleasure.

Judging from his early remarks, Siebert was prompted to write the book by two factors: the natural human tendency to repress a memory or awareness of our common mortality (memento mori) and contemporary culture’s tendency to celebrate the here and now. The latter tendency, he would remind us, is very recent—only about two hundred years old. Before that, for a variety of reasons, death stalked cultural consciousness.

After establishing what he calls “two cultures,” which I would demote to two perspectives, Siebert devotes successive chapters to summarizing religious consolations, artistic or secular consolations, memorable models of dying (featuring Socrates, Charles I, and David Hume), hedonistic answers to death’s finality, the elegiac sense of life, and death in battle. Each chapter is organized historically, with examples of both famous and popular texts and artifacts. An appendix contains a short list of recommended readings, with descriptions, followed by a more extensive bibliography.

The chapter entitled “Partying Among the Tombs” displays the virtues of this study quite well. A clear explanation of hedonism and rational or epicurean hedonism sets up an enlightening survey of the best carpe diem poetry, both ancient and Renaissance, Victorian and contemporary, with the latter’s skepticism about one’s ability to live fully in any moment.

As in the chapter on religious consolations, Siebert does not think art is perfect in its consolations either. Ironically, the power of significant elegies lies in their admitted failure to console the living. Poems by Ben Jonson, Thomas Gray, Tennyson, and John Crowe Ransom are a kind of protest or, at least, a response to “the incomprehensible evil of death.” The best war poetry, too, reveals ambivalence between ennobling valor or sacrifice and the gruesome reality of battlefield deaths.

Absent from Siebert’s study are treatments of death when it involves massive victimization, such as during an epidemic, genocide, and natural or man-caused catastrophe. Boccaccio, Defoe, Camus, and the Dance of Death etchings, for instance, movingly reflect human reactions to the Black Death, from the despairing to the aesthetic. Absent, too, is much reference to dying in drama, music, and film where, one might argue, it achieves its most affecting performances.

Everyone will miss some favorite text: no Stephen Crane? Dickens? Beowulf? This study does not attempt to be exhaustive, except in categorizing, explaining, and exemplifying the range of artistic responses to death through a focus on certain poems, essays, and a few scenes in fiction. One is informed without feeling overwhelmed by too much analysis or hurried by too many examples. The clear, often-witty style, the sensible organization, the lack of theoretical pleading, and its very compactness make Mortality’s Muse a book I expect to return to regularly.