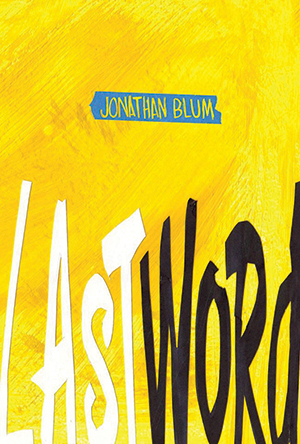 One aspiration of many writers is to maintain a comical thread throughout a serious work. Jonathan Blum is just such a writer. In his debut book, the 2013 novella Last Word, Blum escorts the reader deep inside a well-to-do Jewish family’s Florida home, where the parents struggle to inculcate their three children with a wholesome Jewish upbringing, and their children present them with . . . well, let’s call them great challenges.

The story’s narrator is the father of the family, Kip Langer, a successful orthognathic surgeon who obviously loves his two daughters, Renata and Mina, and his thirteen-year-old son, Eric (the child from a previous marriage), but he doesn’t really understand them. Eric, alienated, overweight, technophile that he is, doesn’t make family relations easier when he brings everyone down the rabbit hole of his teenaged angsty, ill-conceived escapades. The story unfolds as a simple family tale and soon ends up with the reader not knowing just how far the kids can go, while the two dumbfounded parents stand near-paralyzed as they pull their hair out in frustration.

So what happens to cause such parental consternation? Without giving too much away, suffice it to say the boy isn’t happy with his life, and he wants to pay the school, its faculty and staff, the students, and even the other students’ parents—every single one of them—back. How to do this? Computers, obviously. Blum deftly spotlights our technology-crazed world and exposes contradictions all of us face—moral, spiritual, and identity based—and does so without ever losing the seriousness, even while we laugh out loud.

It’s somewhat of a tradition to look at American life through rose-colored glasses, and parents have long been on the forefront of this tendency. This book’s narrator is no different. Though he is obviously a good man, Kip is deeply flawed, and yet he wouldn’t be an interesting character if he wasn’t. When he chooses not to “see” certain events that are far too unpleasant, matters are made worse. As a reader, our sympathies seem to flutter from Kip to his son and back again. But both of them deserve our love. In one scene, when the whole school seems to be turning against his son, the father stands in front of the principal, faculty, and parents and says, “Who can tell me why, at a Jewish Day School, that teaches Jewish values and history, a history that includes centuries of blame and persecution based on nothing but pure hatred, and costs $18,700 a year per student—why is my son being scapegoated?” The pain here is palpable, and Blum is highly skilled in showing the reader the complexity of contemporary Jewish life in a largely indifferent gentile world.

Earlier this year, Jonathan Blum was a guest on the legendary radio program Bookworm. On the show, the host, Michael Silverblatt, called him a “success story,” a writer who’s been plugging at it for over twenty-five years and now finally finds his book in print. Blum teaches creative writing classes at the Iowa Writer’s Workshop’s Summer Writing Festival, where I took a class with him. His energy brims over with a lifelong love of the greats—Hemingway, O’Connor, Carver, Cheever, Denis Johnson, and more. As one who, like Blum, admires great fiction, I see some of those influences in his work: the melancholy and astuteness of Bellow and the humor of Roth, among others. I’m glad that after six years of trying, someone accepted his book for publication. Let’s hope there are more to come.