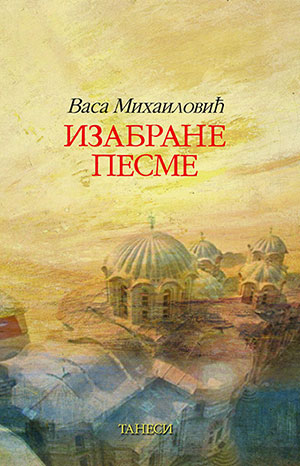 With 131 mostly prose poems in six named sections, we get a clear picture of the Serbian American poet Vasa Mihailović (now eighty-eight years of age), who emigrated to the United States after being a prisoner of war in Italy and Germany during World War II. He taught Slavic literature at UNC Chapel Hill for many years before he retired. He has published eleven books of prose poetry, two of haiku poetry, four collections of short stories, translations of ex-Yugoslavian authors, several anthologies, a memoir, and numerous reviews for World Literature Today.

The first section, “Frescoes Written by Life,” is filled with observations about Serbian monasteries, as in “Ravanica,” where children abandoned by their parents are taken care of by nuns, or in “Bogorodica Ljeviška,” where the visitors “take off a piece of its wall because they believe in its healing for women who cannot get pregnant.” The second section, “Ave Patria,” returns to Serbian history and events from the perspective of an emigrant who dreams of returning to his idealized homeland but, when he does, cannot find anyone to communicate with and returns to the US disappointed.

In the section “From Spring into Winter,” he observes nature and different seasons, followed with a section of love poems for an unidentified love, presumably his deceased wife, whom he misses. He recalls Mozart’s “Eine kleine Nachtmusik,” which they listened to when they first met. In the section “Memories,” he returns to childhood, his old house, his father playing a melody for him on a violin, and the passing of his mother.

The final, longest section, “Images and Occasions,” is filled with a variety of unrelated images such as a dog who mourns for his master, a captain during war, a dolphin dying from a plastic bag, a tango played on the radio, and a dying man who gives his books away to his friends.

We don’t know which books these poems came from or if any of these poems are new, but together they provide a picture of an emigrant poet who wishes to make a final statement about his writing career. Vasa Mihailović still longs for the ideal yet is satisfied with the choices he has made in life, a life filled with images and poetry.