Men We Reaped: A Memoir by Jesmyn Ward 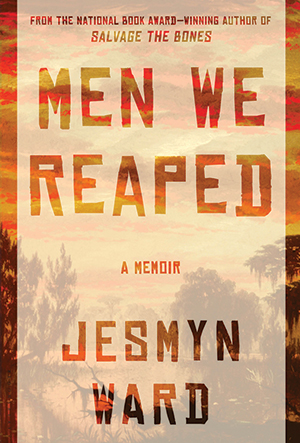 In Men We Reaped, Jesmyn Ward crafts a beautiful narrative about loss, grief, and remembrance. Ward’s second novel, Salvage the Bones, earned her the 2011 National Book Award. She continues to impress readers as she steps away from fiction to engage memoir.

Ward recounts the deaths of young black men from her hometown of DeLisle, Mississippi. Five young men—Roger, Demond, C. J., Ronald, and Joshua—lose their lives prematurely in a span of just four years. Among these men is Ward’s own brother, Josh, who dies after a drunk driver hits him and flees the scene. The driver, who is white, is only convicted of leaving the scene of an accident and not manslaughter. Without a promising education and lucrative job opportunities, all of these young men struggle to find meaning in their lives.

The author structures her memoir carefully, weaving together past, present, and future. Ward begins by taking a sober look at her town’s history and her family’s history. She punctuates her travel through time with chapters focusing solely on the five young men. The legacy of racism haunts each chapter, revealing how it affects young black men and women in the American South. What is most remarkable is Ward’s ability to name the significantly different but always overlapping lived experiences of boys and girls in the South. Boys learn to long for freedom while girls learn to resist freedom’s appeal. Nevertheless, both boys and girls succumb to depression as well as alcohol and drug abuse. As Ward makes clear, deep systemic oppression and gross institutional failures often claim the very lives of young black men and culminate in the inauspicious futures of young black women.

Ward’s memoir successfully re-veals how an epidemic of racism and economic inequality has affected and continues to haunt her family and her community. But her reflections gesture at an epidemic that reaches far beyond the Gulf Coast. Ward contributes thoughtfully to recent publications on black masculinity, which have highlighted the lives of young black men in inner cities. Her words have surfaced at an opportune time when discussions about race, inequality, and black masculinity have garnered national and international attention. She also places herself in great literary company, situating herself among writers like Richard Wright, the late Maya Angelou, and Ta-Nehisi Coates. Ward adds a refreshing view to the existing conversation underway in print and elsewhere, entering the conversation as a poor, young black woman in the rural South who faces the complexities, and the misfortunes, of black masculinity.

Men We Reaped challenges readers to consider institutional failures left unaddressed, failures that affect those who are young, have too little, and are the most overlooked. When the memoir comes to an end, Ward expresses how her mother’s legacy has inspired her to “write the narrative that says: Hello. We are here. Listen.” In giving voice to these young men who can’t speak, Ward certainly compels readers to listen.