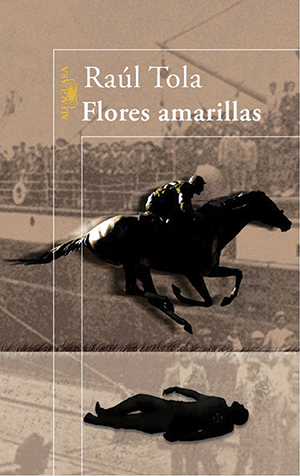 Raúl Tola is one of Peru’s most respected print and television journalists; in addition, he is an accomplished fiction writer, as his third novel, Flores amarillas, well proves. The novel tells the story of the rise and fall of Severo Versaglio, a Peruvian entrepreneur of Italian descent who makes his fortune in textiles during the second half of the twentieth century. Severo is the grandson of Albano Versaglio, a working-class Italian who is a supporter of Garibaldi’s reunification efforts in nineteenth-century Italy, who is forced to leave his home in northern Italy, along with his son, Giovanni, to save his life. After leaving Genoa, Albano and Giovanni settle in Callao, Peru, the main port city near Lima, where they slowly create a new life with the help of other Italian immigrants.

Two generations later, Severo Versaglio becomes a self-made entrepreneur whose personal ambition and close ties to the Odría dictatorship (1948–56) will make him wealthy and allow him to exercise a great deal of power and influence in Peruvian politics. As his wealth grows, Versaglio’s business practices become tainted with moblike corruption and violence, mostly due to the obscure doings of Lucas Méndez, Severo’s brother-in-law and underboss. In an unexpected turn of events, Versaglio is arrested and expelled from Odría’s inner circle when Méndez seeks to overthrow Odría and kill Severo to consolidate his own network of economic and political influence; in the end, the failed overthrow sends Méndez into exile and precipitates the demise of Severo’s fortune.

While Flores amarillas can be read as a well-documented chronicle of Italian migration to Peru and contemporary Peruvian history, it is also a text that pays homage to mafia fiction, such as Mario Puzo’s The Godfather (1969). As in this best-seller, personal alliances and codes of conduct among family members may appear to be strong, but, in reality, loyalties are much more fragile than they first appear and can quickly lead to nasty retaliations when greed and power take over. Another important influence on Tola’s narrative is Mario Vargas Llosa’s masterpiece, Conversación en La Catedral (1969), which is undoubtedly the best portrayal of the Odría dictatorship to date.

These influences not withstanding, Tola’s novel is a masterfully crafted narrative with several subplots and well-developed characters whose flaws and virtues as individuals all revolve around the powerful presence of Severo in his role as the family patriarch. Additionally, the book’s notable realism is complemented by a multifaceted narrative strategy that successfully portrays the Versaglio family’s past and present. In fact, Tola’s ability to balance style and substance in this riveting story allows Flores amarillas to become a rich mosaic of various historical periods, as power and greed quickly occupy center stage.

A gifted novelist, Tola masterfully blends social history and personal drama with a fertile imagination and solid narrative technique. With this text, he has penned an ambitious and well-crafted novel that immediately captures the reader’s attention and curiosity. Raúl Tola is certainly a writer to watch for in the latest generation of writers to come out of Peru in recent years.