The Storied Life of A. J. Fikry by Gabrielle Zevin 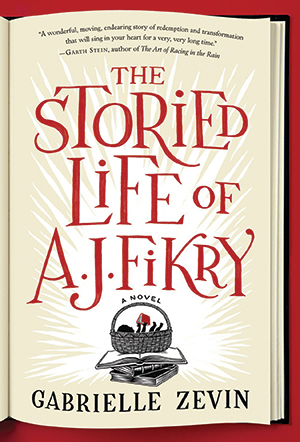 Recently widowed A. J. Fikry seems the last person on Alice Island to whom one would entrust a toddler named Maya. But he owns a bookstore, which is exactly the environment her distraught mother wants for the child. So she leaves Maya, drowns herself, and thus the story of one man’s awakening and a child’s growth begins.

The main story is leavened by book talk: books for Maya, for different customers, for flourishing book clubs, and Fikry’s “shelf notes” on certain titles, which serve as interchapters. While some of these notes are short reviews, others qualify more as personal memos to his daughter and wife, indicating the possible significance of certain stories for their lives. In such a world of stories, it is only appropriate that Fikry and the woman who becomes his second wife—a publisher’s representative—bond over a book they both love even though it has not sold well.

Chapters are not written to surprise the reader. There are twists, sometimes announced as such by characters who read, write, and like to hang their lives on literary references. “A Good Man Is Hard to Find” is at once a grim short story by Flannery O’Connor, a response to Fikry’s marriage proposal, and an orange nail polish (“A Good Mandarin Is Hard to Find”). Characters are pleasantly consistent, rather than dynamic. After all, they are on an island where the predictable prevails: the seasons, tourists in season, holidays, the school year, book club meetings. Titles indirectly recommended to the reader accumulate gradually. Few things happen fast, and even revelations are slow in coming. Neither does the novel end in death or marriage.

Gabrielle Zevin sets a natural life-rhythm that succeeds in keeping one’s interest, through switches in point of view and chapters that focus selectively on certain periods in the characters’ lives. The expectations of normalcy allow one to accept the jumps in time without dissatisfaction. To a bookish character, it is acceptable to skip over months of selling and book discussion groups to the crisis that occurs when a relative gives the family e-reader devices. With the digital waves all around, one wants to believe in the possibility that independent bookstores can survive and continue to raise the cultural literacy of their communities. Zevin has succeeded in crafting a very pleasant book about and for dedicated readers—in short, us.