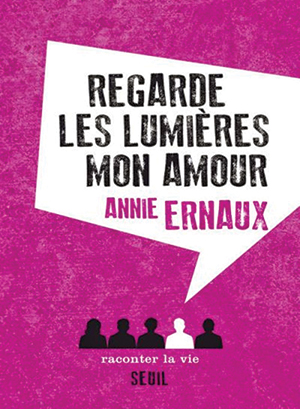 Regarde les lumières mon amour is a wonderful addition to Annie Ernaux’s life writings. Her observations of social life in a Parisian suburb reveal her incredible gift in noting the smallest details of present reality. This book is similar to two previous publications, La vie extérieure (2000; see WLT, Winter 2002, 179) and Journal du dehors (1993), as it happens to adopt the same diary-like format. The voice of the author is clearly present in her observations of the scenes and interactions in the supermarket Auchan in Cergy, where most of the passages take place. The author explains in her introduction, “the supermarket is a great human rendezvous, a spectacle.” She adds: “In order to be able to ‘tell our life’ in this day and age, it is without hesitation that I chose supermarkets. I saw the opportunity to give an account of what really happens when they are frequented.”

The journal recounts the author’s visits to Auchan from November 2012 to October 2013. Her writing reveals not only what she sees but what she feels and, of course, her personal thoughts. She also notes sensitive issues related to writing, such as her dilemma about having used in one of her observations the phrase “a black woman” instead of writing “an African woman,” not knowing if she was actually of African descent or if she should have just simply said “woman.” She explains: “Writing ‘a woman’ would have been to erase a physical characteristic that I could not have denied having seen immediately . . . denying something of her being, and not a little thing, her skin. It would be refusing her visually in the text. Exactly the opposite of what I want to do, of my commitment to the written word.”

In contrast with some of her other works, the author exposes herself to the observations of not just her readers but also of complete strangers that she encounters in the supermarket. An example of this is when she has a brief conversation with a complete stranger who happens to be familiar with her writing. As they both get ready to purchase their items, she realizes how vulnerable one can become when exposed to the public: “By placing my articles on the mat, I think with a little discomfort that she will see what I have purchased. Each product suddenly takes on a new meaning, revealing my lifestyle. In turn, I am suddenly being observed.”

This book portrays certain aspects of our times. Annie Ernaux states it herself: “This journal not only reveals our era but also exposes it to be seen.    . . . It is to distinguish objects, individuals, routines and to give value to their existence.” She certainly demonstrates a concern for our time period as she notes the differences in social class, cultures, and how commercialism conditions our behavior and determines our social values. Regarde les lumières mon amour is a fascinating contribution to contemporary literature.