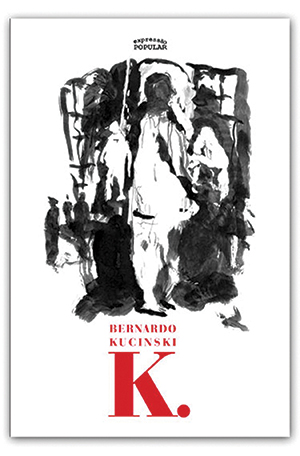 In Bernardo Kucinski’s novel K, an elderly man searches for his adult daughter, a political militant who vanishes at the height of the military dictatorship in Brazil. As a Jew who emigrated from Poland to the Brazilian metropolis of São Paulo in the 1930s, the protagonist cannot help but relate the tragedy to other losses in his family, including the death of a sister in a Polish prison and the extermination of his first wife’s entire family during the Holocaust.

K is the first literary work published by Kucinski, a septuagenarian who came to fiction writing late in life, following his retirement as a university professor and journalist. Although K is presented as a work of fiction, it is clearly based on the real-life disappearance of the author’s sister, chemistry professor Ana Rosa Kucinski, in 1974. As Kucinski explains in an author’s note, “Everything in this book is invented, but almost everything happened.” By reimagining the story of a disappeared Brazilian woman from the perspective of her Jewish father, the novel invokes themes of intergenerational memory and trauma as well as the Hebrew story of the binding of Isaac (albeit in inverted form, for in K the father is unable to rescue nor even see justice done for his child).

K reads like a novel, yet the book’s twenty-eight chapters could also be approached as autonomous short stories (some written in the present tense, emphasizing that this tragedy is not buried in the past but continues to throb now) that reflect upon the disappearance of the protagonist’s daughter from various narrative perspectives. Among the most compelling chapters are those that assume the voices of other historical actors, some of them unexpected, such as a notorious real-life political policeman (Sérgio Fleury), a moderate general in the Brazilian armed forces, and numerous professors at the University of São Paulo participating in a vote to fire their missing chemistry colleague in the wake of her disappearance. Two chapters take the form of letters, one written by the disappeared woman and the other by her husband.

Throughout the novel, the protagonist’s missing daughter remains a pulsing absence. Yet Kucinski resists turning the plot into a mystery or thriller. K reveals less about the disappeared than about the devastating effect of disappearance on those left behind. Indeed, a key theme of the novel is the father’s overwhelming sense of guilt for his daughter’s tragic fate.

Originally published in Portuguese in 2011 (the same year Brazil inaugurated its National Truth Commission to investigate the crimes of the military dictatorship), K is a compelling novel that illustrates how fiction can be a more powerful mode of bearing witness than testimony. Of the lamentably few contemporary Brazilian novels translated into the English language, K is certainly one of the most important to emerge in recent years.