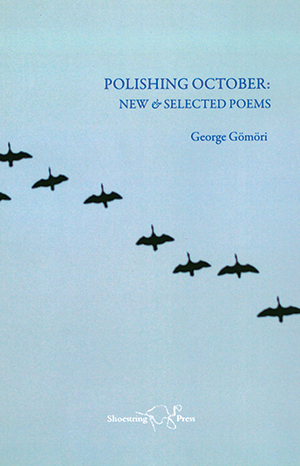 Upon hearing that George Gömöri has lived in England since 1956, someone remarked that Gömöri was hardly Hungarian anymore. This shows an understandable ignorance of émigré writers not only of that generation but of much younger writers like Tamas Dobozy. For them, as for William Faulkner’s characters, “The past is never dead. It is not even past.”

This is evident from “Daily I switch languages,” the epigraph to Polishing October, in which Gömöri claims that he can write in English of abstractions but only in Hungarian of “words that compose the sunset, make it glow.” But as he says in “Christmas 1956,” there’s “no way back” to his native country and would not be, as he says in a later poem, for another thirty-three years, when his hair had begun to whiten.

Two sections, “Poems for Mari” (his wife) and “Chagall’s Tomb,” have, on the whole, a softer emotional tone than the bulk of the collection. The poems to his wife are muted; those in “Chagall” tease out miniature narratives embedded in the work of other artists and writers like Miklós Radnóti, Casanova, and Nostradamus—sometimes, as in the last case, using them to comment on current trends.

The strongest poems in the collection draw upon his memories of Hungary and his sense of exile, not only his but those of others killed or exiled like Osip Mandelstam and Radnóti, or the recurrent figure of Odysseus, whose return to Ithaca is problematic if not impossible.

These poems tend to be gray-tinged, offering only marginal hope while mourning and celebrating the past. “New Poems,” the last section, is in tone very much like “My Manifold City,” the first section, and for that matter “Polishing October” (the month of the Hungarian revolution and the prelude to Gömöri’s exile). In the title poem of that section and of the volume, he says that the revolution gave him the right to be proud of his country and that when nations are judged, “I need say no more than ‘56’ and ‘Hungary’—and then our countless sins will be forgiven.”