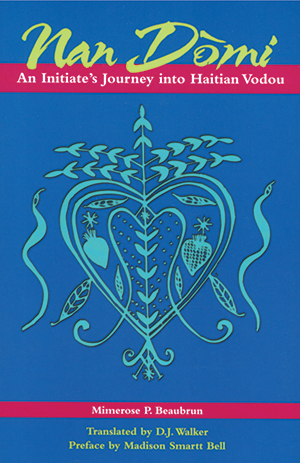 Nan Dòmi is Mimerose Beaubrun’s fascinating, first-person narration recounting her study of, and initiation into, Haitian Vodou. What began as a doctoral thesis in anthropology on the lakou became the detailed description of Beaubrun’s reaching, with Aunt Tansia as her primary mentor, the “state of lucid dreaming,” Nan Dòmi. The culmination of the pilgrim’s quest to enter that transphysical state is noted on the book’s last page: “I was in Nan Dòmi.”

So Haiti, known for its natural and sociopolitical calamities, offers us a book about the immaterial, trans-rational spirituality of its Vodou, about the world beyond time and space. Most works about Vodou until now were, according to Madison Smartt Bell’s superlative preface, about its “external” elements. Thus, Beaubrun’s personalized account of her spiritual itinerary is even more valuable.

Nan Dòmi is a state difficult to describe with words. For the author’s spiritual mentor, words lack importance since they are rational manifestations of logic. Vodou–the word means “spirit” or “mystery”–exists in the realm of dreams, trances, possessions, the realm of the irrational, the realm of religion. In the realm of dance, too—as Aunt Tansia affirms, reminding us of Sufi dervishes, dance “is a passport that permits you to take long journeys into the unknown.”

The primal separation is between the known and unknown worlds. Traveling beyond the known, the dreamer can view both worlds. Clairvoyance (je)—“the pleasure of having found the conjunction between two worlds and having been able to maintain itself there”—is a necessary attribute of novices, who must be able to distance themselves from the physical world in order to enter Nan Dòmi. The lwa, on the contrary, comes from the unknown world seeking its entrance into the known through the possession of its chwal (horse). The lwa provides the key link to the unknown world of Ginen (Guinea) and to one’s ancestors.

Such movement between worlds is illustrated by the chapter recounting a neighbor’s capacity, by means of her “level of consciousness,” to transform herself into a squawking bird, and by Beaubrun’s capacity—accompanied by Tansia—to finally perceive, by means of her “altered . . . consciousness,” the black mass from which the cries of the bird, the neighbor’s double, emanate. We are reminded of the alleged transformation of Makandal, the rebellious slave being burned at the stake, into a mosquito.

Mimerose Beaubrun is the co-founder of the musical ensemble Boukman Eksperyans. (Alleged to have sparked the Haitian Revolution in August 1791 through the sacrifice of a black pig in the woods near Le Cap, Jamaica-born Boukman, nicknamed Book Man, was a Vodou priest.) Interestingly, the author maintains Bois Caïman might be the shortened form of Bwa Kay Iman (The woods of the house of the iman). Such observations illustrate the fascination of this book, which enlightens us about Haitian spirituality and provides invaluable insights into Haitian culture.