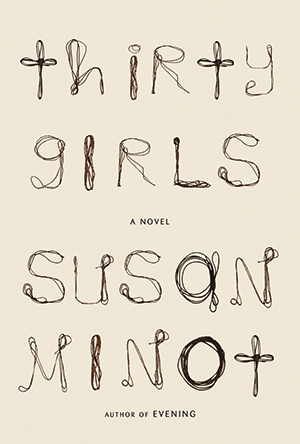 The temptation to use the term “ripped from the headlines” is strong, but this remarkably moving novel about the kidnapping of thirty African girls predates recent events and yet presages them. In 2012 Joseph Kony was an acknowledged force of evil in Uganda, and Susan Minot’s riveting new novel is based on some of his actions.

Thirty Girls opens with Sister Guilia, the headmistress of St. Mary’s, awakened by banging at the school’s doors. In a series of cinematic and harrowing scenes, Minot conveys the terror of the rebels’ attack and subsequent kidnapping of 139 girls, of whom 109 were offered to be released if 30 would stay. Sister Guila’s Solomonic quandary is rendered exquisitely and sets the stage for the novel and the appearance of Esther, who remains captive and narrates the saga of the thirty girls.

Minot’s other narrator, an American journalist named Jane Wood, has arrived in Uganda to cover this story, but first she must find her way to meet the girls. Her journey through Uganda is at times romantic and at others harrowing. Jane is, in a way, quite fragile following the death of her ex-husband, and the reader is privy to her innermost thoughts during much of the novel.

The alternating narratives allow the reader to contrast the difficult life of Esther, wise beyond her years, and the much more pampered life of Jane, despite her difficulties. In traveling to find the girls, she sets off on a road trip with a group of white Africans who are self-indulgent and romantic, and she begins an affair with one of them, Harry, a man seventeen years her junior. At times she is like a dazed schoolgirl in love; at others she shows enormous sensitivity to her surroundings.

But Esther is the character with whom the reader falls in love. She can be terse but is often poetic as she provides a clear-eyed description of the rebels and their abuse of the girls. Her voice is pure and devastating: “A rebel ran and caught up to the shadow. He picked it up. It was a smaller girl, I think Penelope. He didn’t bring Penelope back but pulled her over to the trees where it was dark, and I did not want to think what he was doing to her over there. She was only ten.”

The two narratives do not merge until near the end of the novel, when Jane finally interviews Esther, but throughout the work we are attuned to the nuances of each voice and await the possible harmony. We are definitely rewarded for our attention. This is a heartbreaking novel about Africa and about the human condition.