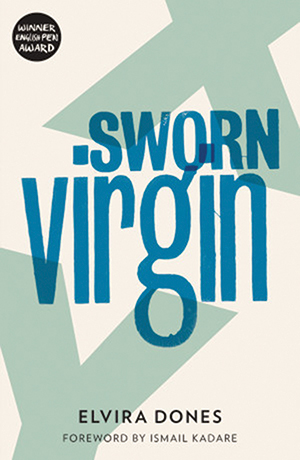 Sworn Virgin, winner of the English PEN Award, highlights the consequences of a little-known cultural practice through the geographical, psychological, and psychosexual journey that reunites the “dry” body and troubled soul of its thirty-four-year-old Albanian protagonist, Hana/Mark Doda. Hana arrives at the airport in Washington, DC, soon after 9/11, having spent fourteen years as a “sworn virgin,” a status that arose because the blood feud engendered by Albania’s medieval law code, the kanun, ended the lives of so many males in Albania’s northern highlands. Since only men could head households in this highly patriarchal region, it was sometimes necessary that a woman switch her gender role within the community, assuming male responsibilities and privileges while observing lifelong chastity.

The novel comprises seven sections that alternate Hana’s American present—her gradual adjustment to modernity, big-city America, and womanhood—with her Albanian past. Hana shuttles between her university in Tirana, the bustling capital, and her tiny village in the mountains “made of eyes that observe and forbid, . . . made of silence,” until at age twenty she takes “the oath.” By doing so, she avoids becoming “a slave” in an arranged marriage. The narrative unfolds in a present tense laced with flashbacks that fill in her backstory.

Dones’s deceptively simple prose—translated from its original Italian, her second language, into a flat English—well suits Hana, who, like her creator, lives distant from her native land and tongue. Seeking fluency in English, frustrated by her awkwardness, Hana periodically cites passages from poetry to express her emotions. If Hana’s voice captures history and place in Albania, where “the echo of centuries rings in your heart,” in Maryland it bridges the gap between America and Albania with prosaic images.

Freed from Albania’s strictures, Hana realizes: “Now I have to invent my own life.” Her cousin, Lila, wants her to become “a normal woman” quickly, but Hana answers, “I can’t hurry my soul.” First she must resurrect the life of her body, its sexuality repressed before it could ever be experienced. As Hana sheds Mark, a “carapace,” she and her Irish American seatmate on the plane from Albania begin an intricate dance of the sexes that leads to physical and psychological rebirth.

Sworn virgins still exist; Dones has filmed a documentary about their lives. But her novel does not simply investigate a unique custom. Rather, it explores many binary oppositions—urban/rural, tradition/modernity, wealth/poverty, West/non-West, communism/capitalism, home/diaspora, male/female, body/soul—to reveal how sociopolitical forces mold individual lives. Ultimately, this spare but evocative novel portrays a woman who negotiates and finally reconciles those binaries to shape an identity that transcends history, tradition, and societal constraints.