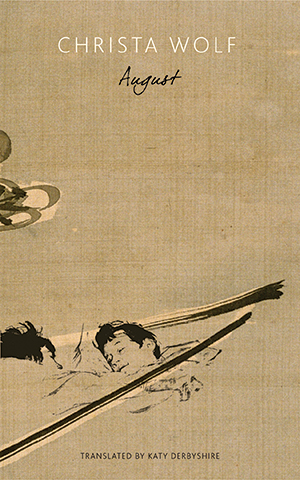 Dedicated to her husband on their anniversary, Christa Wolf’s final story tenderly relays the uplifting power of memory in the face of impending death and sorrow. A story within a story, the narrative’s circular nature demonstrates that our connections with others transcend our own mortality.

From its very beginning, August demonstrates how our memories carry us through time. The account begins with the internal recollections of a now-aged August as he remembers his first fleeting moments in a tuberculosis hospital in the former East Germany. One prerequisite to admission is the requirement to recall the details of how he lost his mother, a request that, decades later, sends him on a journey through early childhood.

As he continues the drive home from work, August remembers even more details of his relationships with others during the three-season stay in the hospital. Through recalling his young yet sincere feelings for Lilo, he realizes that the isolation brought on by death revives his relationships with others. One crucial memory is his and Lilo’s reactions to the death of Hannelore, a female patient: “August remembers that Lilo didn’t sing the children a goodnight song on the evening after Hannelore died.” This commemoration immediately ties the two together even closer: “August felt, and he feels it to this day, that he’d never get closer to Lilo than at that moment, and he learnt that grief and happiness can be mixed with one another.”

By the time August arrives home, his childhood memories blend with those of his recent marriage with Trude. Once again, agony combines with ecstasy, enveloping a now mutely grateful August: “He’s still not capable of putting what he feels into words. He feels something like gratitude that there was something in his life that, if he could express it, he’d call happiness.”

The story demonstrates that our relationships mingle with our own impending death and that these relationships, and the memory of them, in turn make us immortal. That we must die is a simple side note and has no bearing on the impact our connections with others make on the world. Just as powerful as the story is the fact that this work is the last written testament we have from the late Christa Wolf, who movingly portrays her dedicated relationship with her husband. She certainly achieved her goal in writing this sleek narrative.