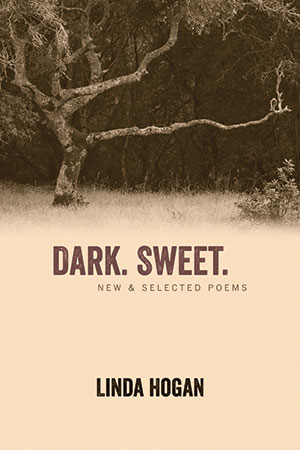 From the beginning of her career, Linda Hogan’s often prayer-like poems evoke liminality, speaking from blurred boundaries of animal and human, self and other, but it is the constant interpenetration of the sacred and mundane, which poet-theorist Jennifer Gosetti-Ferencei calls “the ecstatic quotidian,” that sets Linda Hogan’s work on a plane of its own.

Dark, Sweet includes poems from as early as 1978 and as current as 2014. Throughout the collection, Hogan makes the everyday spiritualism of her poems available to a wide variety of readers by her use of spare, common language. Moreover, her poetry fuses the epic and the intimate in a Native American, feminist rewriting of Whitman’s “merge,” in which boundaries of all sorts are dissolved and the self/poetic speaker becomes intimate with all things, even with the birth of the planet: “In water / the world is breathing, / in the silt.”

Like many other Native American poets, Hogan’s figurative language brings a decidedly political aspect to her work, as in “Going to Town,” where “The black walnut trees are gone, / stolen during the night / and transformed / into the handles of guns.” Likewise, in “The Other Voices,” Hogan identifies the damage done by oppressive social practices, leaving us unable to speak our “inner truths” and equally unable to hear when others do: “Our other voices take sanctuary / while police with their shepherds / stand guard / at the borders of breath / lest our stories escape / this holy building / of ourselves. // . . . We don’t tell our inner truth and no one believes it anyway.”

An examination of human violence is a dark thread weaving through this collection. In the poem “Thanksgiving,” we are confronted by the fact that human hungers are often only temporarily sated by violence, as she describes a “Turkey, blue head on the ground, body in a gleaming white tub with lion claw feet.” In the saga of tooth and claw, none of us are blameless, “all of us have stolen something / in the night” (“Coyote”), and “even the trees with their rings have kept track of the crimes that live within and against us” (“The Light”).

Yet despite human propensity toward violence and our alienation from the rest of creation, Hogan closes the collection with a section entitled “The Remedies.” Among the collection’s many remedies are transformations in which “the story became a song” (“Transformations: Winter Count”), and another in which the speaker is like a firefly, “burning with life / until at last I am light” (“Wicking”), and the hope that we move toward and return to the light, that “in the last breath / we give back all the swallowed / all the taken-in, and it is light, after all, / first and last, we live for, die for” (“Light”).

Linda Hogan’s Dark, Sweet reveals the arc and breadth of a master poet’s life-work. It is one of those pieces of light that we live for.