Nowhere All at Once by Grace Bauer 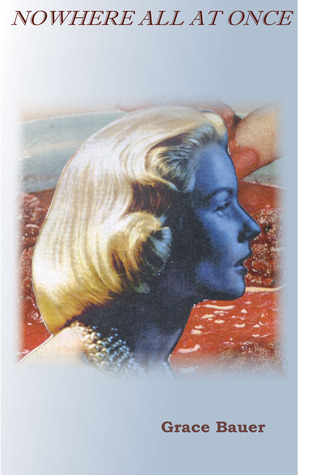 Grace Bauer, in her newest collection (forty-nine poems in four numbered parts), anticipates old age, ill health, and mortality. She has published three full-length collections previously as well as several chapbooks. Having moved from state to state, she now lives in Lincoln, Nebraska, but doesn’t like the lack of changes in the small city and wishes to escape reality. Her dream world matters most, and through her writing she is able “to recover from this world.”

Many of her poems are formal, as in “Great Plains Prayer” (corn, Omaha steaks, Czech culture, tornadoes), “Slacker’s Prayer” (praising “the blizzard for a day at home”), “Blue Monday Prayer” (wasting time on “mundane” work vs. no time for “good works”), “Unrepentant Prayer” (her “last confession was ten poems ago”), or “Mood Swing Prayer” (menopause—“grant me shorter hot flashes”). She is both serious and satirical here, reminiscent of her collection The Women at the Well, a retelling of women’s stories from the Bible. Besides prayers she has sonnets, elegies (in “Breakfast Elegy,” she is afraid of sudden, unexpected death), a ghazal, an epistle (the absurdity of writing a recommendation letter to a complete stranger), and two prose poems. Otherwise, she writes in free-verse stanzas of varied length.

In “Brief,” she addresses an uncle who didn’t add any “branches / to the family tree”; neither has she, speaking openly about not having children. Like the bat who is “crippled [she is] determined / to survive,” and she is not afraid of it, as women living alone often are. She enjoys good-looking waiters but is shocked by the tattooed body of a waitress who is “a work of art,” rejecting the unfamiliar aspects of youth. Still, sexuality intrigues her, and she slips in an erotic poem, “Make Me Vera Wang,” about “Designer vaginas [which] are all the rage / . . . in Hollywood!” Living alone can be dangerous; one could slip and fall, feel helpless, unable to reach anyone for help. “Close Call” bruises are a reminder of what could have happened. “Detours” laments that she can’t buy a sports car as she has never learned to drive a stick shift; her fantasy will remain unfulfilled. She asks for “a table for one” at a Comfort Inn. Still, she doesn’t feel resentment toward men and doesn’t “want to destroy them,” like a snake.

Using the third person, she distances herself from the poems, but she is still speaking about herself, as in “Still Life Is Red,” in which a woman who is listening to a cardinal asks, “Did she want those birds to be / the last thing she laid eyes on?”—in a way anticipating what’s to come after she dies, “a summer day scattered / with sunflowers. Blooming without her.” She ends the book with an elegy in which she mourns the dead who will never return to their familiar people and places. With these poems Grace Bauer solidifies her status as a spiritual, feminist, and mature poet.