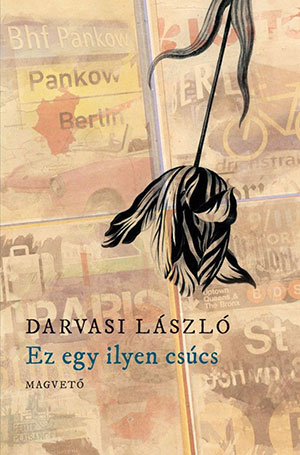 László Darvasi (aka Ernő Szív) is a Hungarian prose writer whose fiction has entertained at least two generations of readers. His grand novel, Virágzabálók (2009; Devourers of flower), was only a critical, not a popular, success; Darvasi does not possess the epic breadth of a Péter Nádas or a László Krasznahorkai. His strength lies in shorter genres, in funny stories, sketches, and feuilletons. In these he is able to create a special atmosphere of half-fiction, half-reality. This particularly applies to his recent collection of stories, Ez egy ilyen csúcs (This is just such a peak), neatly organized in ten chapters.

Apart from describing the last months and eventual death of András Bakó (the poet István Baka), which takes place at Szeged, most of the stories are about the author’s foreign experiences. Taking a leaf out of Kosztolányi’s Kornél Esti stories, Darvasi describes the adventures of his alter ego, Ernő Szív (Ernest Heart), from East Berlin to Sylt, in Belgium, and, even further, in New York, places not only visited but closely observed. The narrator is unmistakenly Hungarian, part sophisticate and part naïf, in one moment a man of the intellectual world and in the next merely a child just lost in the jungle of modernity.

Darvasi is particularly good at interpreting small phenomena, routines, and oddities of life, seen through the eyes of his sentimental hero, Mr Szív. In the chapter “The Berlin Notebook,” he describes his habit of frequenting a local pub where he always orders the same drink until the moment when he realizes that in doing so he severely limits his own freedom of choice. Changing over suddenly to a different drink, he upsets the man behind the counter, who is mystified by this strange behavior. Switching back later to his old routine, however, makes matters even worse: it “destroys” the barman’s self-confidence.

On the whole, Darvasi thrives in mixing tradition with modernity: he buys colored ribbons for Emily Dickinson when paying a visit to her house at Amherst. He also visits a local library in an imaginary Hearttown (presumably also in New York State), where he is shown the first Bible translated into the Indian tongue “Angolkin” (Algonquin), has an imaginary conversation with a very old Joseph Pulitzer, and mentions Johnny Cash and the Celtic group Cocteau Twins in the same breath. In other words, his book is full of past and present entwined in playful inventiveness. A pity (but that is the fault of the book’s editor) that some English names are distorted; for example, the museum visited in New York should be the “Whitney,” and the lead singer of the Cocteau Twins spells her name not as the hero of talk shows in Seattle but simply “Fraser.” But Darvasi is quite right: Liz Fraser has a lovely voice.