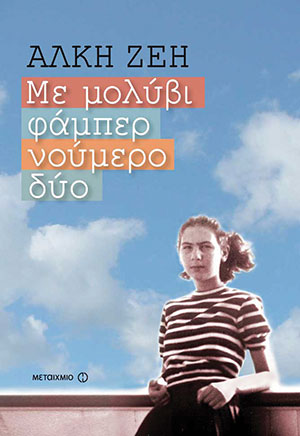 To aficionados of children’s fiction, Alkē Zei has long been a familiar name. His award-winning and much-translated novels and story collections are renowned for their engaging grace, vividness, and direct, usually autobiographical engagement with the history of Greece, turning Zei’s fiction into a true docere et delectare feat.

The same qualities characterize the eighty-nine-year-old author’s previous attempt at adult fiction, the semiautobiographical 2011 hit I arravoniastikia tou Achillea (Achilles’ fiancée), based on Zei’s own tumultuous sojourn to find her exiled husband during Greece’s civil war years. It comes, then, as a natural evolutionary step that her latest best-seller, Me molivi Faber noumero dyo (With a number two Faber pencil), would combine all her prior authorial elements of excellence in being a purely autobiographical novel about Zei’s childhood and her gradual formation, through trial and error, into an author and an activist of the Greek Communist Party. It is, at the same time, by the author’s admission at the end, a kind of true fairy tale her grandchildren never tire of asking her to tell them. History is dramatically present here as well, starting with the death of her great-uncle during World War I, culminating in the atrocities of the Nazi occupation of Greece during World War II, and fading to black with the Greek civil war, right into the plot of I arravoniastikia tou Achillea.

Still, the terrors of history are mitigated by the emotionally rich history of the quotidian that Zei convincingly re-creates through her child- and teen-self’s picaresque vision: her interactions with her large family and her inspired teachers; her many friendships and acquaintances with persons whom the Greek reader immediately recognizes as key figures of the Greek intelligentsia, belles lettres, and beaux arts (admittedly the largest part of the book); her adventurous love affair with and marriage to playwright Yiorgos Sevastikoglou (right in the middle of the Nazi occupation); the role of the Zei women and their friends in the leftist resistance against the Nazis; the hopes and dreams of the war generations for world peace, creative freedom, and the power of art.

Art is in fact revealed as the primum mobile of this portrait of the artist as a young girl. Or, as Zei’s octogenarian voice concludes at the end of the novel, it is all about the fairy-tale transformation of “the Little Silly Goosie [Zei’s childhood nickname] who had wanted to be an author since she was ten, and got started by writing letters for the little maids in her block of flats to their lovers with a number two Faber pencil, on the marble-top kitchen table.”