Miruna, a Tale by Bogdan Suceavă 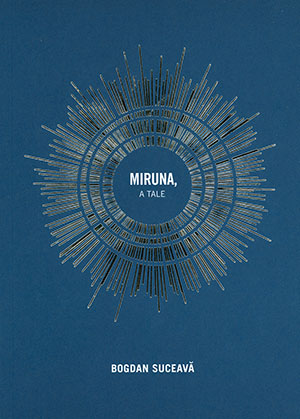 Anyone raised even in the vestigial remnants of an oral culture will respond at some level to the tales in this eloquently told and moving novel, for they show the members of the Bercea family, as other tales tell other families, “who we are.”

They are—the narrator, Trajan, and his sister Miruna—the great-grandchildren of Constantine Bercea, who fought in the Romanian war of independence in the late nineteenth century and earned, through his service, the first land to be owned by anyone in his family. He also brought the first clock to the village of Evil Vale, paid for the first newspaper subscription, and imposed his will on land and beasts, ignoring the other villagers who lived “in thrall to the forest,” dependent on spells to protect them and on stories of fays to explain madness and disorientation.

Although Constantine is clearly a transitional figure from the unchanging past to a world caught in print and technology, he also becomes a kind of mythic figure in the stories told by his son, Niculae, who does not soften events or endings the way that storytellers for children often do. Niculae’s granddaughter, Miruna, absorbs both the content and the spirit of the tales, while her brother narrates—from the point of view of a child but in the language of an adult—in ways that bridge the gap between traditional and modern.

Later in the book, the stories turn to Niculae’s life, less mythic but very much in the spirit of the stories about Constantine. As the young siblings listen, they come to understand intuitively the way in which, as Suceavă writes in the afterword, “facts tend to become transformed into either rumors or ballads or legends.” When the grandfather dies, the children feel that they have been banished from paradise, that “the real world began, that we took our first steps on the earth.”

Yet all is not lost. Miruna has a dream in which “the Angel of the Story” fends off “the Angel of Silence,” or Death, allowing her to encounter her grandfather in imagination. There is loss, but all is not lost, for as the narrator says in the last lines, “if the tale were not true, I wouldn’t have told it to you.”