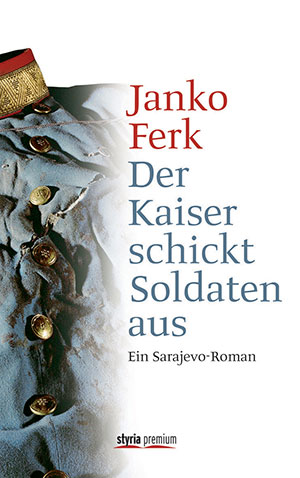 In this year of memories, when historical studies and new evaluations of the circumstances leading to the outbreak of World War I in 1914 abound, a historical novel by Austrian-Slovenian judge, poet, prose writer, and university lecturer Janko Ferk strikes a special note by walking a tightrope between contrasting opinions on the Sarajevo murders. Ferk, a prolific author with over forty books to his credit, has previously ventured into Habsburg history with a biography of Ulrich Habsburg-Lothringen (2011).

In succinct chapters—mostly only one to three pages in length, with the significant historical dates as titles—Ferk reports on events and protagonists from the Austrian, Serbian, and South Slavic points of view. The historical facts are always present in the book, while the narrative fills in blanks about unresolved issues concerning the events in Sarajevo, specifically the questionable shooting expertise of the presumed perpetrator, Gavrilo Princip, who killed both Franz Ferdinand and his “morganatic” wife, Sophie von Chotek, with two masterly shots during the ride to a celebration at city hall.

Franz Ferdinand had enough enemies throughout the Austro-Hungarian lands to widen the circle of suspects far beyond Princip and his small group, linked to anti-Austrian Serbian secret societies. There are also unclear aspects of the planning of the archduke’s coach ride in Sarajevo, the unforeseen change of routes, and possible conspirators among even his retinue.

Although none of the reigning emperors of Germany, Russia, and Austria actually seemed to have wanted the war, their systems had outlived the times, and the general public was for war: Sarajevo was only the beginning.

Der Kaiser schickt Soldaten aus (The emperor sends out his soldiers) has been positively received in Austria and has already appeared in various translations. The small volume sheds light also on the shortsighted Austrian declaration of war on Serbia, apparently long in the making, influenced by negative input from the highest military circles bent on the humiliation of Serbia, which left no room for diplomatic dialogue. The chilling text of the “Ultimatum” to Serbia is fully included in chapter 3, “Juli 1914.” The apocalyptic war, which cost 17 million lives, had started. Sentiments about these events are still controversial among the southern Slavs today, and Princip was recently celebrated as a national hero.

Thoroughly researched—Ferk’s knowledge of the Slovenian language gave him new access to original documents—the book adopts a factual, often quasilegal language, with sarcastic and popular notes and phrases revealing the author’s private opinions, and leaves the reader pensive, shocked, and aware of the complicated, unresolved factors of the tragedy. As a judge, Ferk speaks objectively, critical of both sides for mishandling court procedures for the mostly underage “perpetrators” following the murders. Basic legal principles seem to have been neglected and the verdicts too hastily reached. But he also dwells on the blind fanaticism of the young people, who seem to have been equally misled.