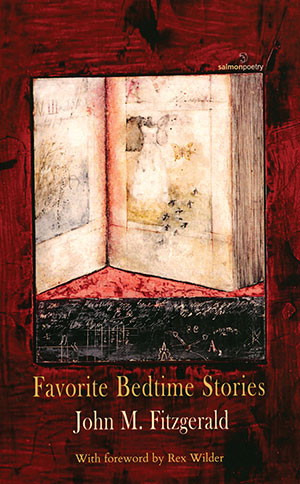 Occasionally brilliant lines and humorous passages are frequently mixed with truly perplexing, illegible passages in this new book by John Fitzgerald. We encounter playful lines such as (in speaking of tooth fairies) “They fashion piano keys from our teeth / to produce that twinkling sound in flight” and (more menacingly) “Hell is awake when the liquor store’s closed / and the spirits are all drunk.” We even get a kind of compressed philosophy of the relationship of language to the experience it tries to name in the line “He stresses each embalming syllable.” Then Fitzgerald loses the reader with passages that amount to inscrutability or even non-sense. This is intentional and even professed in the poetry itself (e.g., “Confused on the surface, the depths concur. / Between boggling, irrelevant arguments, slip in reason” and “Truth needn’t even go in one ear. / In fact, there’s something wrong with you for listening. / If God can make the stupid smart / keep praying”).

A disrespect for the reader, even contempt, is not uncommon in certain aesthetic precincts of contemporary poetry. This reviewer suspects a mixture of the unfortunate influence of language theory, which challenges the possibility of communication, a degree of solipsism reinforced by certain realities of poetry’s place in American culture, and an overemphasis on “self.” The fact is that the long poem in this book, “The Charter of Effects,” comprised of fifteen sections and supposedly the centerpiece of the collection, induces more headache than marvel. Occasional poetic moments are surrounded by deliberate obfuscation and coy, facile writing. “Muses in mind, Counsel cares, in abeyance, / until later when memory no longer relates. / Entire illusions of innerness pray if only rain were beer. / Should instead he hear her coming she is lovely, but he doesn’t.”

Evasion, indirection, compression, and even non-sense in poetry may have their place, but when Schoenberg “liberated the dissonance,” even he knew the importance of some necessary counterbalance—disharmony only exists in relationship to harmony. There are, however, poems in this book that seem written under a different aesthetic, resulting in persuasive imagery mixed with characteristic wit and humor. Take, for example, “Leopard,” which playfully explores the brain-versus-brawn debate in the guise of a leopard vaunting his powers over the monkeys, ending with “Brain, meet mister tooth.” In so doing, Fitzgerald enters into the ancient debate begun with the competing Greek traditions embodied in Achilles (The Iliad ) and Odysseus (The Odyssey). He even steps into the prophetic Bard mode with his poem “The Becoming,” in which he announces “A flower heretofore latent in humans is about to burst,” though he is so annoyingly close to pop philosopher Eckhart Tolle as to be rendering his notions in verse.

Reading this book is like watching a film that flickers in and out of focus; however, we may still want to watch Fitzgerald, because if he ever gives up this notion about non-sense, his work promises to be delightful.